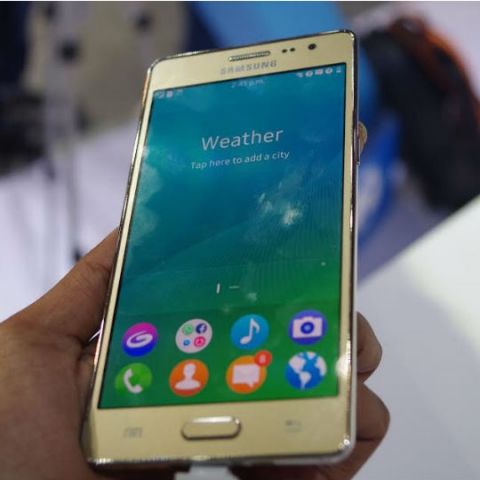 The Samsung Z3 runs Tizen 2.4 and comes with a 5-inch HD Super AMOLED display along with a 1GHz quad-core Spreadtrum SoC

Samsung has launched the Tizen-based, Z3 in India. The phone is priced at Rs. 8,490 and will be available through Snapdeal as well as offline retail channels from next week. It will be available in Gold, Black, and Silver color variants.

The Samsung Z3 runs on Tizen 2.4 and comes with a 5-inch HD Super AMOLED display. The phone is powered by a 1.3GHz quad-core Spreadtrum SC7730S SoC with 1GB of RAM. It also comes with 8GB of internal storage that can be expanded up to 128GB via a microSD card. At the back of the device is an 8MP camera with an LED flash and a 5MP front-facing camera. The phone also comes with a 2600mAh battery along with an Ultra Power Saving mode. Other features of the smartphones include 3G capability and Bluetooth 4.0. The Samsung Z3 also comes with Ultra Data Saving, which is a data compression feature that was included with the Samsung Galaxy J2.

The phone also comes with pre-loaded with games from Gameloft and Rovio as well as lifetime access to MixRadio. Samsung also unveiled the My Galaxy app that will be available for Samsung devices and can be installed from the Google Play Store and the Tizen Store. The app offers deals, discounts as well as device care services in the Home, Services, Care, and My Page segments. The Home segment shows offers and deals. Services will give access to recharges, food, and travel. Care will help users locate Samsung stores and service centers, as well as access to services like the Samsung Smart Tutor. My Page shows favourite deals, offers, and payback points that can be redeemed through Samsung stores.