This man wants to mine cryptocurrency using Tesla Superchargers 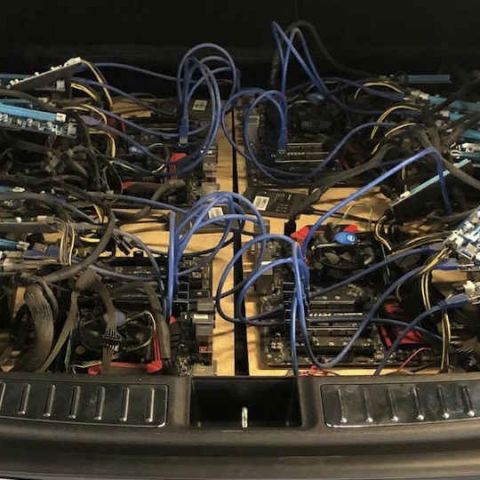 It's no secret that mining Bitcoins and other cryptocurrencies require lots of computing power and electricity. But, mining is also the best way to get your own cryptocurrency. The problem is, that mining requires big investments to be truly successful. Unless you have a Tesla supercharger handy that is.

A Tesla owner managed to install a mining rig inside the trunk of his Model S. The rig is meant to use the free electricity from Tesla's powerful Superchargers to mine cryptocurrency. The owner posted a photo of the rig on the Tesla Owners Worldwide Facebook group.

The Supercharger would at least take care of the electricity needs. The photo suggests the use of GPUs here, so it's not meant for Bitcoin mining, which requires ASIC chips. Yet, it can be used for mining other cryptocurrencies, like Ethereum and more.

Since the miner hasn't actually been put to use, Motherboard went ahead and calculated whether it's financially feasible. The publication points out that the miner would generate a lot of heat inside the vehicle while driving around with such expensive equipment is probably not very safe either.

But more importantly, Motherboard calculated that the rig would require total power draw of 2.4 kilowatts per hour and 57.6-kilowatt-hours per day. So, running the rig take the same amount of power needed to drive a Tesla Model S for 173 miles. The Model S runs for 3 miles per kilowatt hour.

Motherboard found that the miner would only generate about 0.05 Ethereum per day, which currently translates to $23 (Rs. 1484 approx). Is that really worth it then?