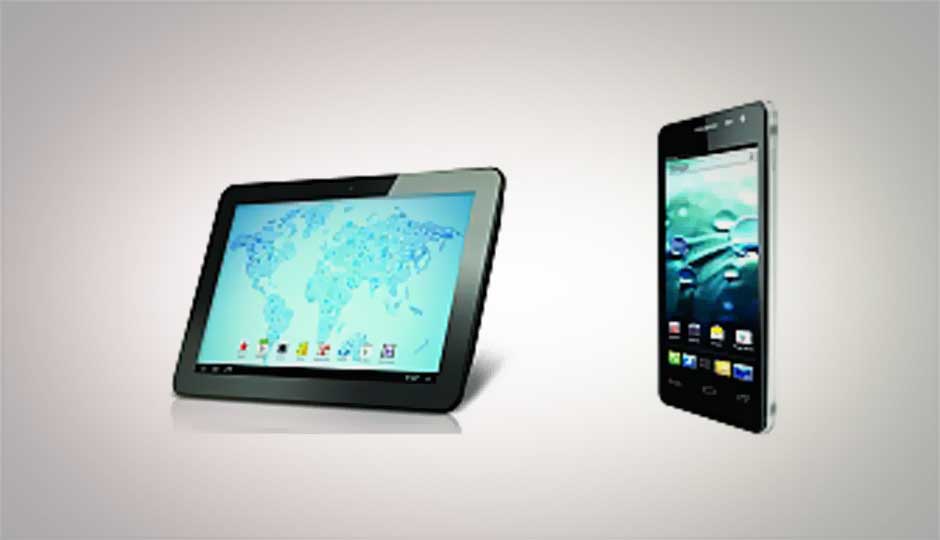 The Spice Stellar Virtuoso Mi-495 is available in India at Rs. 10,499. It has a 4.5-inch display with a 960x540 pixel resolution. The device is quite slim at 9.4mm thin. Out of the box, the Virtuoso runs on Android 4.0 ICS. The rear of the device has an 8MP camera along with a 1.3MP front facing camera for video calls. Under the hood it has a 1GHz dual-core processor, 4GB of ROM, 512MB of RAM, 1700mAh battery, and also supports expandable storage up to 32GB via a microSD card.

The Spice Stellar Pad Mi-1010 on the other hand runs on Android 4.1 Jelly Bean, has a dual-core 1.5GHz processor, 16GB ROM, 1GB RAM, expandable storage up to 32GB via a microSD card, a 10.1-inch IPS display with a 1280x800 resolution and is powered by a 7600mAh battery. It also has a 3MP rear camera and a front facing VGA camera for video calls.

Mr. Dilip Modi, Co-Founder & Group COO, Spice Group said: “The launch reflects our belief in constant innovation and customer delight. Having created the fast evolving segment of Dual-SIM phones in the country, we are glad to offer these technologically advanced and stylish smartphones to our customers, thereby expanding our 3G devices portfolio. We believe the potential demand of fully-loaded 3G smartphones at an aggressive price point will now fuel the aspirations of the evolved customers. Since demand of data services ‘on-the-go’ is rising faster than ever, we see an opportunity to stamp our dominance in this segment.”

Mr.T M Ramakrishnan, CEO – Devices, S Mobility said, “We have priced our handsets affordably to ensure rapid uptake by both - 2G users wishing to upgrade to 3G, and existing 3G users – especially in the metros which are traditional strongholds of Spice. The aim is to dominate the key markets across the country with higher penetration in the semi-urban areas. We are offering the best technology at a price point which will be a delight to the customer. We have launched these Smartphones to concede to the demand of the utilization of the next generation 3G services. Our focus on consumer experience has been compulsive and keeping in line with the same, we have brought in the dual core processor with Quadcore Graphics in the tablet segment and the smart & sleekly designed Virtuoso smartphone.”