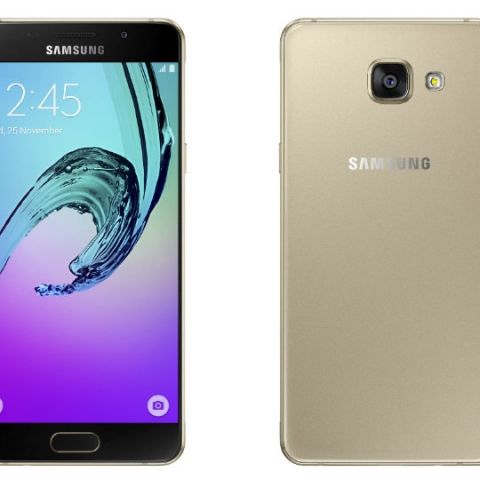 While the wait for the Samsung Galaxy S7 continues, Samsung has refreshed its A series of smartphones for 2016. The company has announced the new editions of the Galaxy A3, A5 and A7. The current model has an all-metal unibody build, and Samsung has incorporated glass into the new one. Designwise, all phones look reminiscent of the Samsung Galaxy S6. The metal band which runs around the phones is flatter on the edges, just like the S6. All of the phones are receiving hardware upgrades as well. While the Galaxy A5 and A7 get a new octa-core processor, the Galaxy A3 gets a slightly faster quad-core processor.

The Samsung Galaxy A series will also receive an upgrade in camera, as both the 13MP rear and 5MP front-facing cameras will feature wide aperture, f/1.9 lenses. While all of the three phones do comes with the same camera setup, we believe that there will be a difference in the image quality, as Samsung hasn't revealed if all of them will use the same camera sensor on all three. The 13MP shooter on the Galaxy A5 and A7 also get OIS (Optical Image Stabilization). Besides these, all three phones will get improved battery.

The new design also incorporates thinner bezels and a thinner overall profile of just 7.3mm on each phone. As for the processors, Samsung has not revealed what processors they will be using on these. The company has only released the core count and clock speeds of the processors used. No prices or availability have been announced yet. But, we expect Samsung to price all of three phones well and competitively.

“At Samsung, we are committed to continued innovation, inspired by the feedback and needs of our wide range of consumers. With the introduction of the Galaxy A (2016), we took the consumer feedback on our original Galaxy A models and made thoughtful and impactful improvements offering consumers a seamless convergence of style and performance for their everyday lifestyles", said JK Shin, CEO and Head of Samsung’s IT and Mobile Business.

Out of the three, the Samsung Galaxy A3 and A5 are getting significant upgrades in display, resolution and processing power, and the Galaxy A7 gets a new SoC. Here is a quick spec comparison between the three phones: