According to reports, Samsung will be officially unveiling the Note 4 smartphone on September 3 ahead at the IFA 2014 in Berlin. 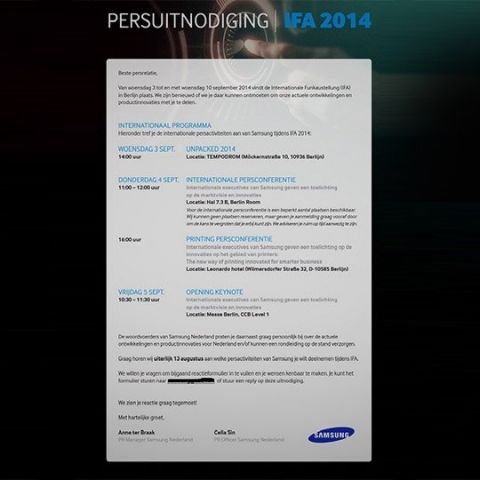 We've been hearing rumours that Samsung will be launching the next gen Note smartphone – dubbed as the Note 4 – on September 3. Well, various media reports reveal Samsung has already started sending invitations for an 'Unpacked' event on September 3 ahead of the IFA 2014 conference in Berlin.

According to reports, Samsung will also be launching a few wearable devices running on Tizen operating system and virtual reality device dubbed as the Gear VR. As far as the Note 4 goes, as suggested by the recent leaks and rumours we can expect the smartphone to come with superior specs than the current Note 3.

The Samsung Galaxy Note 4 is likely to feature a 5.7-inch Quad HD display. The phone will be available in two versions – one running the Exynos 5433, while the other one on Snapdragon 805 – along with 3GB of RAM.

It's notable Samsung's senior VP Hyun-joon revealed the company will soon launch two new devices – one with a larger display and another built with "new materials – believed to be the Note 4 and Galaxy Alpha.