We take a comprehensive look at the nine new products launched by Samsung at its London event. 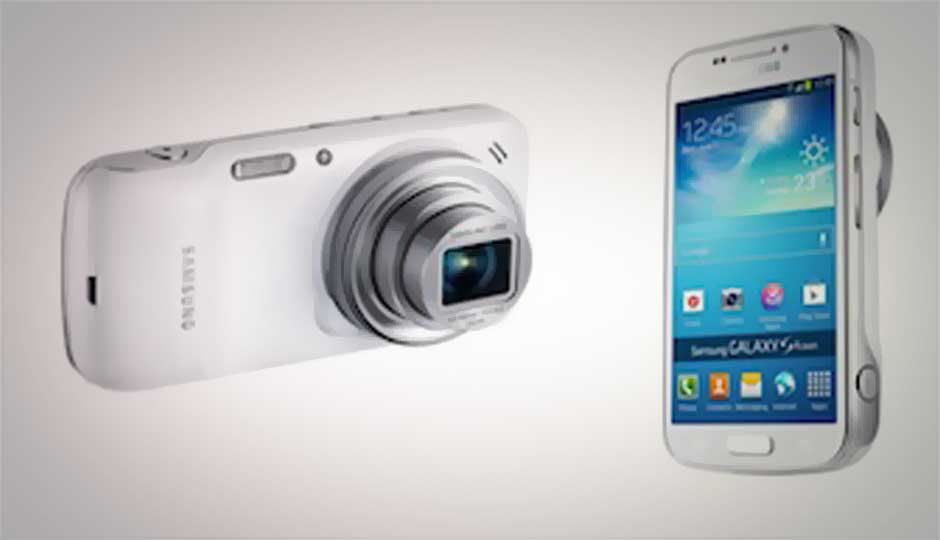 At an event held in London Samsung has announced a wide range of products in its Galaxy and ATIV series of devices. Some of the devices announced have been making their rounds on the rumour mills for quite some time. Others were a downright surprise. At the event, Samsung showed off tablets running Windows as well as Android, the S4 Mini, the S4 Active, ATIV Book 9 Plus and 9 Lite and more. Nine gadgets were shown off at the event. So, here’s a quick roundup of all the gadgets that Samsung showed off at the event.

Samsung Galaxy NX
What happens when you combine a Samsung Galaxy smartphone along with a Samsung NX camera? You get the Samsung Galaxy NX mirrorless camera. Yes, it’s a mirrorless interchangeable lens camera running Android. Now, this isn’t the first time that Samsung has infused cameras with the Android OS. Remember the Samsung Galaxy Camera? Well, the NX is on the same lines except that it’s the world’s first Android camera with the ability to change lenses. The device runs on a 1.6GHz quad-core processor and also supports 3G, LTE as well as Wi-Fi. The camera has 16GB built-in storage and a DRIMe IV imaging processor. You can control the functions of the camera from a 4.8-inch LCD touchscreen display that has the Android interface.

On the specifications front the Galaxy NX camera has a 20.3MP CMOS sensor, with ISO sensitivity ranging from 100 to 25600. It has 5 point phase-detection AF along with 247-point contrast AF, Optical Image Stabilization and 1080p video recording. No pricing information was announced for the camera but it will hit store shelves in the second half of 2013. 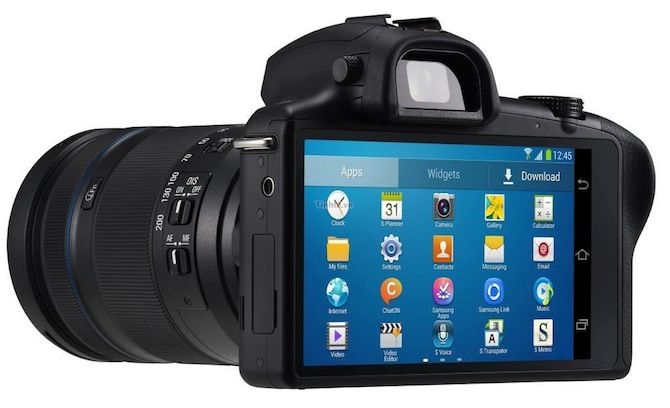 Samsung ATIV Q
If you want a tablet with the ability to run Android along with Windows 8, then the ATIV Q is the device for you. The device runs on the latest Intel Haswell Core i5 processor and has a 13-inch display that boasts of a whopping 3200x1800 pixel resolution giving it a 275ppi pixel density. The display of the ATIV Q is higher than the iPad’s retina display and that is saying something. It is relatively light too weighing a mere 1.3kgs.

On the outset, the device is like your average everyday 13-inch tablet. Lift the display up and you have a keyboard. The mechanism seems very similar to the Sony VAIO Duo 11. The tablet also comes with Samsung’s S Pen. The switch between the two OSes can take place with a simple tap of a button. The fact that the tablet doesn’t need to restart to switch between the OSes is really cool, but how this will translate in real life is something we will comment on when we get our hands on it.

No pricing or availability has been announced for the Samsung ATIV Q. If you are looking for a Windows 8 notebook and an Android Jelly Bean tablet, you can consider this device, as it will offer you the best of both worlds in once device. 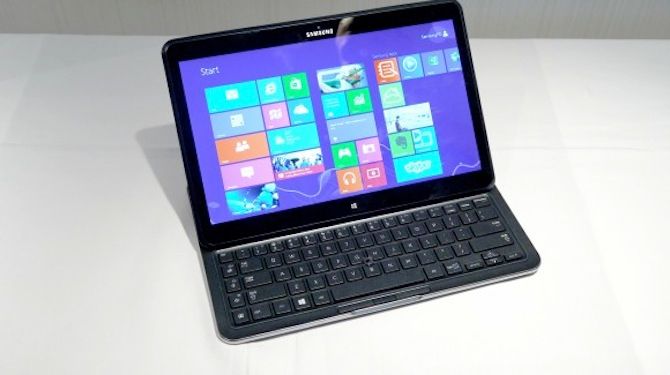 Samsung ATIV Tab 3
Samsung claims that the ATIV Tab 3 is the world’s thinnest Windows 8-powered tablet measuring in at 8.2mm in thickness. The 10.1-inch touchscreen display boasts of a 1366x768 pixel resolution. The Tab 3 is powered by an Intel Atom processor and weighs a mere 550 grams.

From the outside, the tablet looks like Samsung’s 10-inch Android tablet, the Galaxy Tab 10.1. It even houses the S Pen. The storage can be expanded via a microSD card. What remains to be seen are the apps that Samsung pre-loads on the device, which will utilize the full potential of the S Pen, which is quite an attractive feature for the users of Samsung’s Galaxy Note series device users.

No pricing or availability has been announced for the Samsung ATIV Tab 3.

Samsung Galaxy S4 Zoom
Samsung is cashing in on its Galaxy S4 brand with the launch of a few devices that boast of a variety of features. Actually Samsung could name these devices anything but they chose to stick with the S4 name and add to it.

Starting off with the S4 zoom, the smartphone has a 4.3-inch display with a 960x540 pixel resolution. It has a 1.5GHz dual-core processor. Now the display side of the smartphone has the display and looks pretty much like your average everyday smartphone. It is the rear of the device that looks really different. The rear of the device looks like a point and shoot camera. So, imagine the original Samsung Galaxy Camera with the ability to make calls. The S4 Zoom runs on Android 4.2 Jelly Bean and has 8GB built-in storage of which a mere 5GB is user accessible, expandable via a microSD card. A 2330mAh battery powers the entire package.

The camera side of the S4 Zoom houses a 16MP backside illuminated CMOS sensor and 10x zoom. Samsung has bundled 25 different scene modes in the smartphone/camera hybrid including "HDR," "panorama," "night" and more. You also have access to third party apps Android camera apps to take advantage off.

There is no word on the pricing or the availability of the Samsung Galaxy S4 Zoom camera smartphone hybrid. 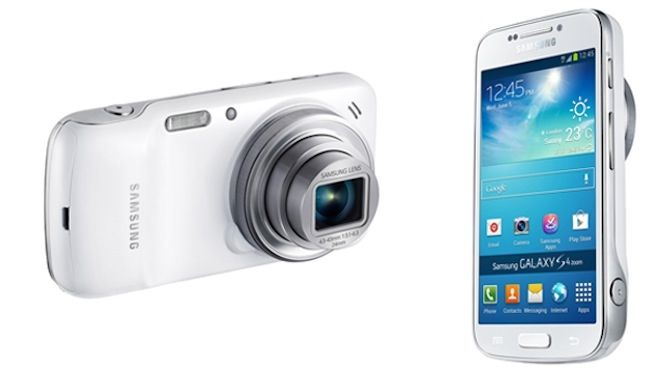 Samsung Galaxy S4 Active
If a rugged version of the Samsung Galaxy S4 is your requirement, then the S4 Active is the device for you. The smartphone will be available on AT&T for $199.99 (Rs. 12,000 approx.) starting June 21. There is no information on a global launch date of the device. The phone is 9.1mm thick and weighs 153 grams.

The S4 Active is a waterproof smartphone up to a metre and for up to 30 minutes. So, this is a smartphone you can safely take to the bathtub with you! The Active runs on Android 4.2 jelly Bean and is skinned with Samsung’s TouchWiz UI. Under the hood, it has a 1.9GHz quad-core processor along with 2GB of RAM. The 8MP camera of the smartphone can be used under water its Aqua mode. The front of the smartphone has a 2MP camera for video calling. It also has 16GB built-in storage expandable up to 64GB via a microSD card. For its connectivity options, the device offers 3G, Wi-Fi, NFC, USB 2.0, and Bluetooth 4.0. A 2600mAh battery powers the smartphone. 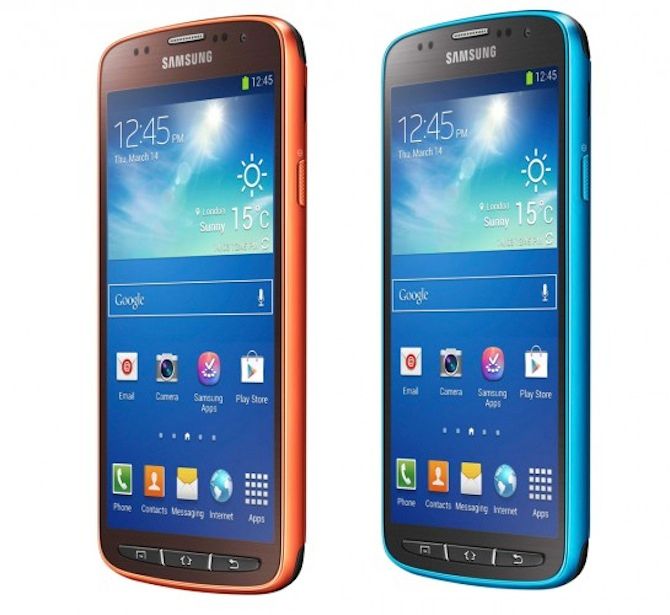 Samsung Galaxy S4 Mini
The S4 Mini has a 4.3-inch qHD (960x540 pixel resolution) super AMOLED display. It is pwered by a 1.7GHz dual-core processor along with 1.5GB of RAM. It has 8GB of built-in storage expandable up to 64GB via a microSD card. The rear of the smartphone houses an 8MP camera and the front has a 1.9MP video-calling camera. The S4 mini supports Wi-Fi a/b/g/n, Bluetooth v4.0, GPS and NFC that will be available on the LTE version only in terms of its connectivity options. The phone also houses an IR blaster that which will help you use the smartphone as a universal remote. The S4 mini runs on Android 4.2 Jelly Bean skinned with TouchWiz. A 1900mAh battery powers the entire package. 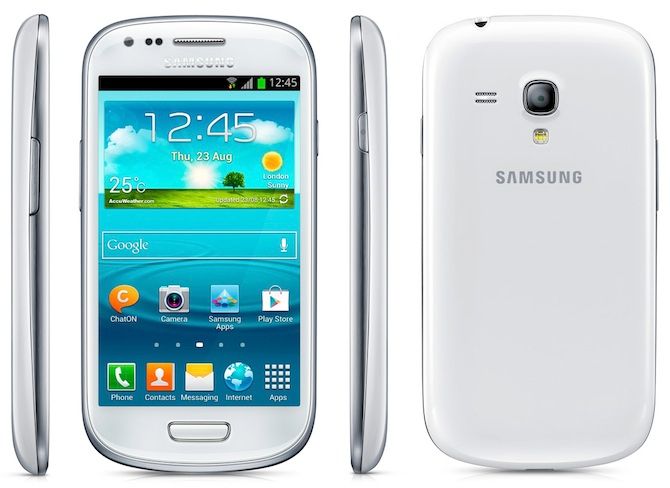 Samsung ATIV One 5 Style
The ATIV One 5 Style is an all-in-one touch-screen PC from Samsung. It has a 21.5-inch full HD touch screen display and houses an AMD A6 quad-core processor, 4GB RAM and runs Windows 8.

In terms of connectivity options, all the ports are neatly laid out on the back of the device. You get access to two USB 2.0 ports, two USB 3.0 ports, audio jack, SD card slot, Ethernet port and HDMI out as well as an HDMI in option to connect your gaming console or Blu-ray player. 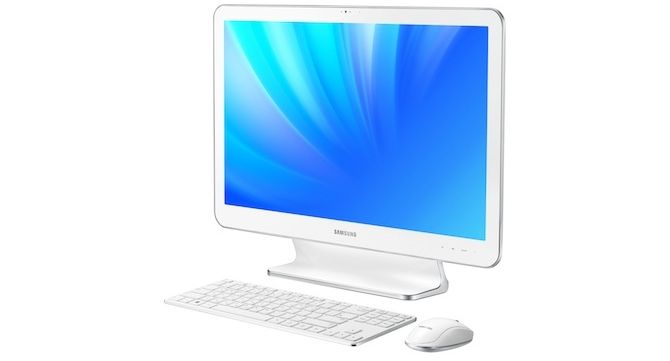 The ATIV Book 9 Lite on the other hand shows off a 13.3-inch multitouch display with a 1366×768 pixels resolution. An AMD A6 quad-core CPU along with 4GB of RAM powers the device. It also houses 256GB SSD storage. Samsung claims that the ATIV Book 9 Lite has a battery life of 8.5 hours.