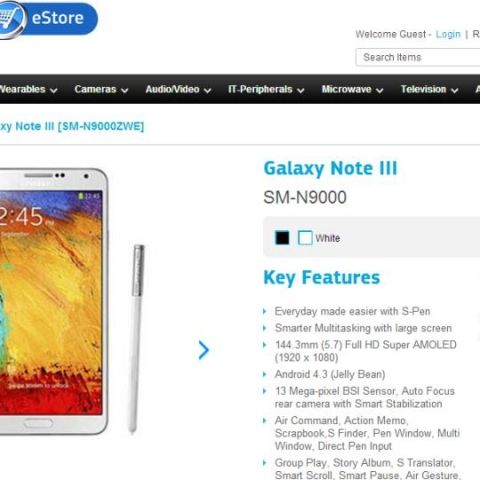 Samsung has dropped the prices of its Galaxy Note 3 and Note 3 Neo on Samsung’s India estore. E-commerce site Flipkart.com has followed the electronics giant with an even bigger price reduction.

The move has been anticipated as Samsung's way of clearing its stocks before the official release of its next generation Galaxy Note 4. The phablet is expected to be launched at the IFA event in Berlin in September. According to reports, the device will have a 5.7-inch display with 2560 x 1440 pixels resolution. It will feature a powerful Exynos 5433/Snapdragon 805 processor paired with 3GB of RAM. The smartphone will have a 16MP rear camera with optical image stabilization.

Samsung has done major price restructuring for its devices as the company posted its worst quarterly profit in two years. The electronics giant added that the company expects the July-September handset shipments to pick up by 10 percent from the previous quarter, but warned that the second half of 2014 would "remain a challenge".

The Korean giant quietly slashed prices of the Galaxy S4 and Galaxy S4 Mini in May and reduced the price of its Gear Fit fitness band to Rs. 12,100 last month.

Flipkart is selling the Galaxy S5 for a reduced price of Rs. 34,752, while Samsung continues to retail the handset for Rs. 51,000 on its official estore. Samsung had earlier dismissed reports about a possible price cut in the Galaxy S5 in an email stating, "reports claiming Samsung Electronics has revised prices of Galaxy S5 are false and baseless" and the Galaxy S5 "continues to be priced at Rs. 51,500."