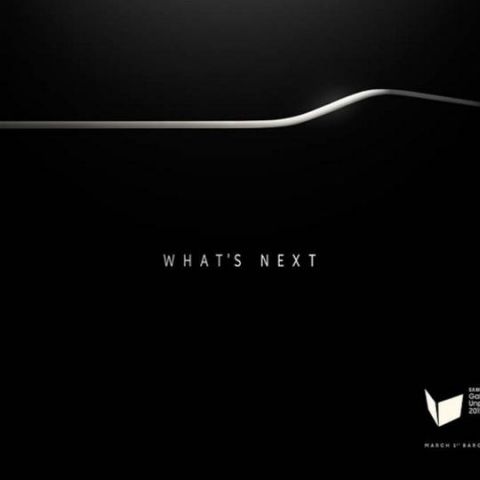 Samsung has sent out press invites for a MCW event where it is expected to announce its next flagship phone, Galaxy S6.

Samsung has sent out press invites for a March Unpacked event on the sidelines of the Mobile World Congress in Barcelona, Spain. According to reports, Samsung will be unveiling its next flagship smartphone, the Galaxy S6, at the event.

Vietnamese journal Tinhte has published the press invitation which shows a curved edge of a smartphone on a black background alongside a simple message that reads “What’s Next.” The South Korean giant is expected to announce the Samsung Galaxy S6 along with a special version of the Galaxy S6 with a curved edge display dubbed the S6 Edge and a Samsung's rumored round smartwatch likely to debut at MWC 2015 new smartwatch with a round design at the event.

According to rumors, the Samsung Galaxy S6 will feature a metal unibody design, and will have a 5.1 inch display with 2560 x 1440 pixels resolution. It will have a Exynos Octa-Core chipset coupled with 3GB of RAM. The smartphone will have a 20 MP rear camera and a 5 MP front camera. The Galaxy S6 will have a 2550 mAh non-removable battery and is expected to run on the latest Android 5.0 Lollipop OS.

Apart from Samsung, rival HTC has also sent out media invites for an event on March 1 with the tag line “utopia in progress”. According to reports HTC may unveil its next flagship device- the One M9 at the event. The smartphone is expected to feature a 5 inch HD display, 64-bit Qualcomm Snapdragon 810 processor with 3GB of RAM and will run on Android 5.0 with HTC Sense 7.0 UI on top. It will have a 20.7 MP rear camera and 13 MP front cameras.