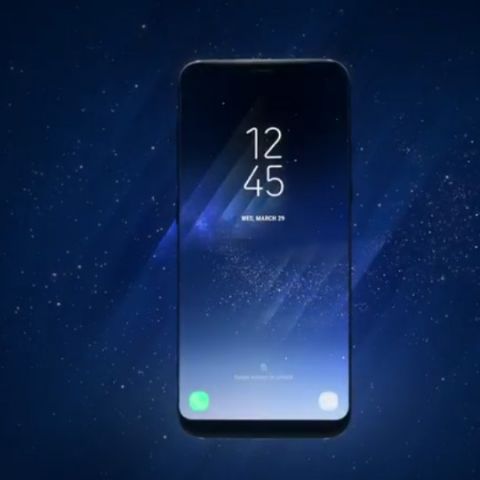 Samsung has finally unveiled the Galaxy S8 and S8+ smartphones. The new phones use 5.8-inch and 6.2-inch bezelless displays that were teased at MWC 2017. The metal bodies are complemented with glass back, which looks similar to the Galaxy S7 edge. The Samsung Galaxy S8 and S8+ will be available from april 21 in USA, and we can expect the devices to launch in India in April itself.

Both the phones use the new bezelless displays, which Samsung calls Infinity display. The Samsung Galaxy S8 has a 5.8-inch display and the S8+ has a 6.2-inch display, both with 2960x1440 pixels resolution. It has similar screen ratio to the LG G6, i.e 18:9, which Samsung claims will offer better video watching and multitasking, along with streaming HDR content. Above the display, both phones feature Iris scanners in addition to the fingerprint scanner at the back, an integrated Home button underneath the glass front, and facial recognition as well.

As rumours suggested, the US edition of the Samsung Galaxy S8 and S8+ smartphones are powered by Qualcomm's latest Snapdragon 835 flagship SoC. Internationally (India included) the devices will be shipped with Samsung’s new Exynos 8895 SoC. Both phones have 4GB of RAM and come with 64GB native storage, which is expandable via microSD cards. The Samsung Galaxy S8 has a 3000mAh battery and the S8+ has a 3500mAh battery, and both devices support fast charging via both wired and wireless media.

On the camera front, both phones have 12MP rear modules with OIS and f/1.7 lens. The front camera now has an 8MP sensor with f/1.7 lens, with autofocus. The two phones will be shipped with Samsung’s new AI assistant, called Bixby. This is integrated into Samsung’s UI, which is layered on top of Android 7.0 Nougat. Bixby has its own dedicated physical button located on the left side of the phone. While all of these have already been revealed, prices are almost ready to be announced. Stay tuned for further updates.