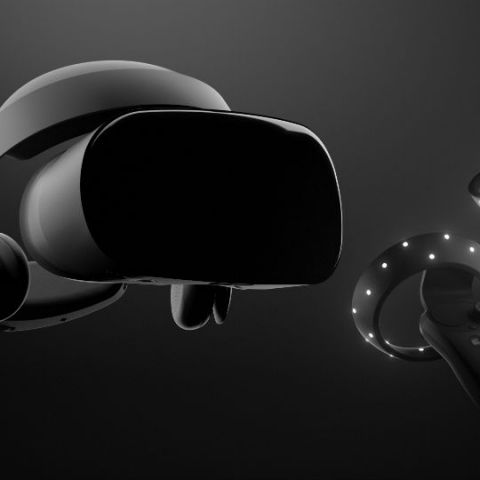 Samsung is the latest to embrace Microsoft's Windows Mixed Reality platform with the launch of HMD Odyssey headset. Samsung HMD Odyssey features dual 3.5-inch AMOLED displays with 1400 x 1600 resolution and a 110-degree field of view. The headset is positioned to offer better VR experience than similar headsets from Acer, Dell, HP and Lenovo.

The Odyssey is priced at $499, which puts in the same league as HTC Vive or Oculus Rift. It comes bundled with motion controllers and has built-in AKG-tuned headphones with 360-degree spatial audio support. It also comes with IPD adjustment at the base of the headset like Rift that allows the user to adjust the distance between the two lenses to get a sharper picture for optimised VR experience.

Mixed Reality is a new platform that Microsoft believes will help it merge the virtual and augmented reality environments and it was first showcased last year. The Redmond-based software giant also places its $3,000 HoloLens devices under the mixed reality platform but the new device from Samsung is mainly a VR device. Microsoft says the new Mixed Reality headsets offer simple set-up with easy inside-out position tracking and no need for any external sensors. The new wearables supporting mixed reality also support 6 degrees of freedom (DOF) motion control accuracy.

Samsung HMD Odyssey is now available for pre-order and will be available from November 6. The Mixed Reality headsets require Windows 10 Fall Creators Update, which arrives on October 17. Microsoft says there are more than 20,000 apps in the Microsoft Store including titles like Minecraft, Skyworld, Luna, Obduction and Dreams of Dali from InceptionVR. It is also working with Valve to bring SteamVR content to Mixed Reality headsets.

While virtual reality was billed as the next big thing after smartphones and Facebook acquiring Oculus for nearly $3 billion, the category is yet to gather mainstream. It remains unknown how Microsoft will be able to push Mixed Reality to the mainstream especially when Apple and Google are bringing augmented reality to their mobile platform.