The Samsung Galaxy S9 displays high resilience against scratches, exhibits good build quality and passes all the tests its put through successfully. 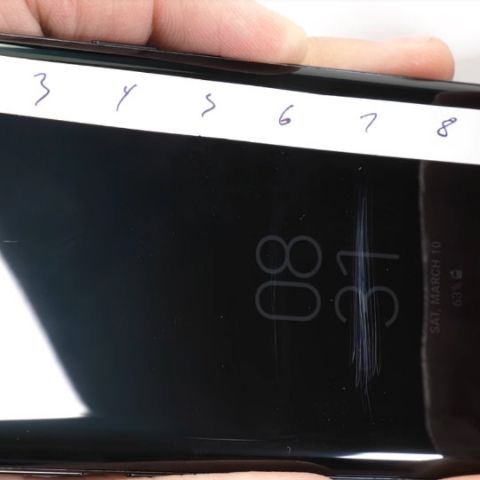 Samsung’s latest flagship smartphone has undergone JerryRigEverything’s durability test and has fared quite well. The smartphone has been scratched, bent and burned for testing how durable it is. The tests commence with the YouTuber Zack scratching the smartphone’s display. The Moh scale is used to determine the level at which it scratches and in this case, it does so at Level 6, with deeper grooves appearing at level 7. The OnePlus 5T, iPhone X, iPhone 8 and the Samsung Galaxy Note, all scratched at the same grade. Here, level 10 is the toughest to scratch and a tempered glass gets scratched at level 6 whereas a Sapphire screen, as seen on the HTC U Ultra, scratches at Level 8.

Following the scratch test, the YouTuber uses a razor to test the build quality of the smartphone. It has no effect on the display, the front-facing camera or the iris scanner, which are tucked under the display. The earpiece is also sturdy and despite the scratches, doesn’t come off. The all-glass rear panel of the Galaxy S9 (performance analysis) is also resilient to scratches and so is the camera. However, the now conveniently placed fingerprint scanner is scratched by Zack’s razor blade but continues to work without a hitch. Edges of the smartphone are made of metal and are scratched easily.

Next up came the flame test in which about 12 seconds, some pixels on the smartphone’s display turned white after being exposed to the flame. However, the pixels recover once the flame is removed but the oleophobic coating is burned off. Finally, the tests conclude with the bend test, which the Samsung Galaxy S9 (first-impressions) passes successfully.