The Samsung Galaxy S8 has been part of major leaks in the past. The smartphone has been leaked in renders and video clips before, and now a new leak shows the device's button placement. The Samsung Galaxy S8, and its larger sibling S8+, will be officially launched on March 29.

One of the biggest changes coming to the Galaxy S8 is the compact design and slim bezels. In order to accommodate a large display in a smaller body, Samsung is reportedly ditching the home button. The new leaked images posted by Slashleaks shows that the Galaxy S8 will offer an on-screen home button. With Galaxy S8, Samsung may finally bring on-screen Android navigation keys including use of home button as seen in the image here. 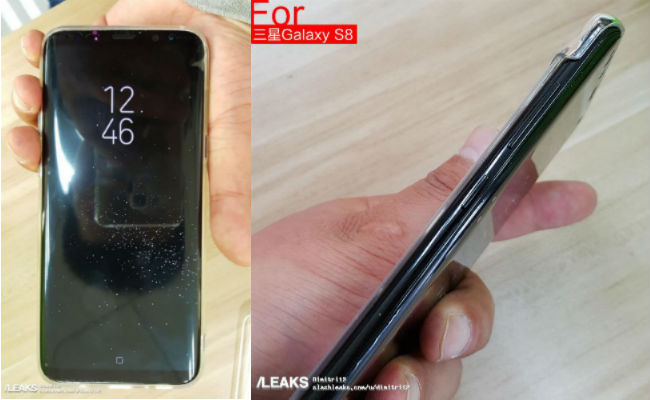 The new leaked images courtesy of an anonymous case maker suggest that the power button and volume rocker will be on the left, while dedicated button for Bixby AI assistant will be on the right. The handsets are also tipped to sport edge-to-edge Infinity Displays with Quad HD+ resolution.

One of the leaked images also seems to confirm Galaxy S8's fingerprint sensor moving to the back. However, its positioning next to the camera sensor seems weird, and Samsung would probably focus on the Iris scanner placed next to the front camera. The Samsung Galaxy S8 has also appeared in a short video which more or less confirms the previous leaks. The pre-orders for the device is expected to start from April 10 and will go on sale starting April 28.