Samsung Galaxy S7 edge Black Pearl, the latest in the expanding colour variants will be shipping to Indian customers from December 30. The Korean smartphone maker has listed the device on its Indian e-commerce portal. Samsung Galaxy S7 edge Black Pearl priced at Rs 56,900 comes at a premium but the price has been justified with a larger 128GB storage.

With Apple iPhone 7 and iPhone 7 Plus Jet Black variants topping charts all around the world with its popularity, Samsung decided to offer similar trim with its Black Pearl option. The S7 edge Black Pearl variant doesn't differ much from the previously launched S7 edge Olympics edition. The smartphone offers glossy black panel on its back which should rank as Samsung's best fingerprint magnet till date. The smartphone was recently announced for global market and the company is introducing it here very soon. 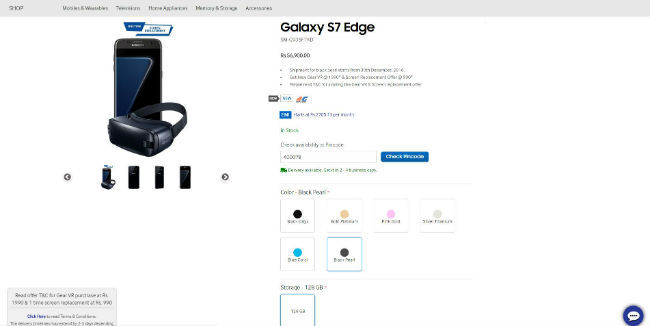 Having lost Galaxy Note7 as the sales driver for the second half of 2016, Samsung has been expanding S7 edge lineup with different colour options. The smartphone has been launched in Pink Gold, Coral Blue and Black Pearl colour options apart from the already available choice of Gold, Silver and Black Onyx colour variants.

Samsung Galaxy S7 edge continues to be one of the best flagship Android device even ten months after its initial launch. The smartphone comes with one of the finest 5.5-inch Quad HD Super AMOLED display with dual curved edges. The device is powered by company's own Exynos processor coupled with 4GB RAM and now 128GB storage option available with Black Pearl variant here. The Galaxy S7 edge's highlight is the dual pixel autofocus based 12MP rear camera with OIS and f/1.7 aperture. The rear camera is capable of recording 4K UHD videos and offers one of the most saturated colour options among all smartphones in the market.

Samsung Galaxy S7 edge houses a decent 3600mAh battery and runs Android 6.0 Marshmallow with planned upgrade to Android 7.0 Nougat. Samsung may have lost its dominance to Google's Pixel XL smartphone but S7 edge continues to provide an all round experience and it is also less likely to explode.