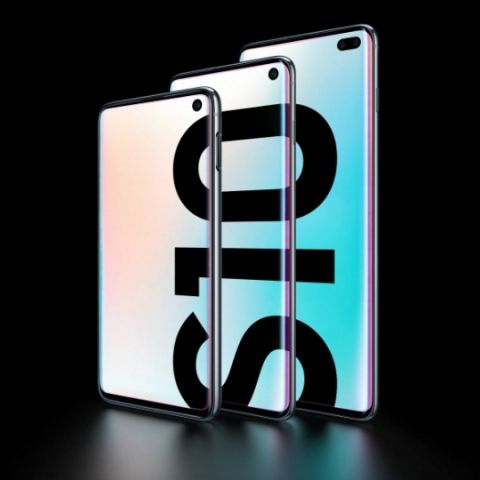 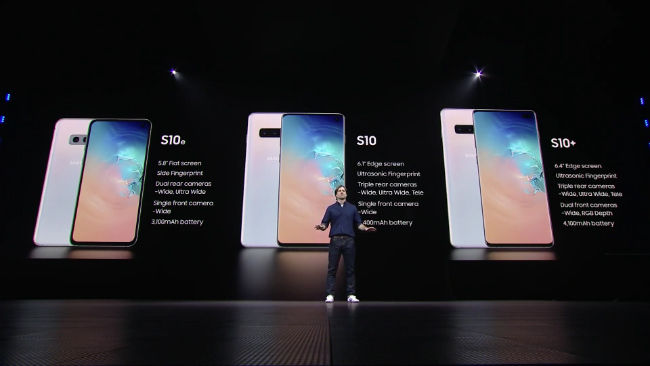 The Samsung Galaxy S10+ stretches edge to edge and even folds along the edges. It’s all screen with a dual camera module integrated inside the panel, placed on the top right corner. When placed side by side to a Samsung Galaxy S9+, it looks the same size but with a little more screen. The Galaxy S10+ has a 6.4-inch Edge display, while the Samsung Galaxy S10 has a smaller 6.1-inch panel. Because of the two punch-hole cameras, it’s called the Infinity-O display. Samsung claimed to have used proprietary laser cutter to install the camera components in the screen.

More importantly, the display, Samsung claimed, is the “most colour accurate display ever on a mobile device”. It supports 16 million colours at 100 percent colour volume and is HDR10+ certified, the first such smartphone to be certified the higher HDR standard. Samsung calls this “Dynamic AMOLED”.

The display is also notable for being the first to implement an ultrasonic fingerprint sensor. It uses ultrasonic sound waves to scan your fingerprint, and Samsung said it doesn’t need the extra force. It’s also protected with machine-learning based anti-spoofing algorithms to protect fingerprint spoofs, both in 2D and 3D. Furthermore, the ultrasonic nature allows one to unlock the phone in any conditions. It’s also apparently faster than previous optical in-display fingerprint sensors. Whether you can put a protective glass on top of the display remains to be seen.

Triple cameras on the back, two on the front, powered by AI

The Galaxy S10 cameras are also assisted by a “neural processing unit” which allows the camera to recognise 30 different scenes. It changes mode automatically and adjusts the final result based on the learnings. There’s also new feature — Composition Assist. It suggests how to frame the scene you want to shoot, something we saw on the Vivo NEX Dual Display phone and was quite useful.

The cameras also shoots in HDR10+ thanks to hardware-based tone mapping and has a Super Steady Video mode to shoot stable videos which reportedly uses the ultrawide sensor to reduce the cropping. The front camera also shoots in UHD.

Samsung also teamed up with Adobe to create a mobile-version of Adobe Premier Rush optimised for Galaxy smartphones. Samsung also announced the camera SDK is available for third-party developers to leverage the camera’s capabilities. There’s a dedicated Instagram mode in the camera which lets you shoot Instagram stories and put stickers, etc. right within the camera app.

Instead of specs, Samsung used two big partnerships with Adobe and Instagram to promote the Galaxy S camera this time. Is this the end of the camera spec-war?

7nm Exynos 9820 SoC with 8GB or 12GB RAM on the Galaxy S10+ and up to a whopping 1TB onboard storage. It’s not clear whether it’s the UFS 3.0 storage Samsung introduced in the Galaxy Fold. The Galaxy S10 is also powered by the same processor with 8GB of RAM and upto 512GB storage. Both have support for a microSD card as well.

Thanks to the new processor, there’s a 29 percent bump in CPU performance and 37 percent boost in graphics processing. Samsung also said it’s working with Unity to bring more powerful mobile games to the flagships.

AI also features in the phone’s performance. The Samsung Galaxy S10’s AI software optimises the CPU, RAM and even the device temperature based on how you use the phone. Samsung claimed it gets better over time. There’s Intelligent Wi-Fi that seamlessly switches between Wi-Fi and LTE and even notifies if the Wi-Fi connection is unsecured. The phone also supports the new WiFi-6 standard.

The Galaxy S10+ has a larger 4100mAh battery while the Galaxy S10 has a 3400mAh powerhouse. Both supports wireless charging which is 36 percent faster than the Galaxy S9. 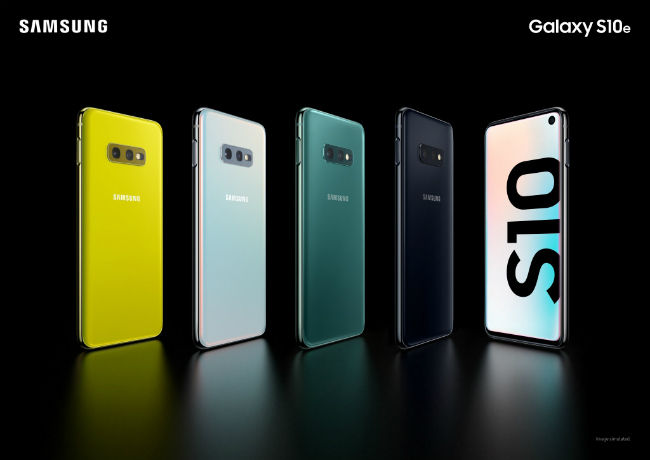 Samsung also launched a more affordable Galaxy S10E. It has a smaller footprint with a 5.8-inch flat AMOLED display and but has the Dynamic AMOLED branding indicating it is HDR10+ certified. There’s FullHD+ resolution with a 19:9 aspect ratio. On the back, there’s two cameras instead of three — a wide-angle 12MP sensor with 77-degree field of view and another ultra-wide 16MP fixed focus sensor with 123-degree field of view. On the front is a 10MP selfie shooter integrated into the display on the top right corner.

The Galaxy S10E also skips on the in-display fingerprint sensor, choosing to settle for a side-mounted one.

It has the same hardware under the hood with the Samsung Exynos 9820 in global markets and the Qualcomm Snapdragon 855 in the US. It’s offered in 6GB and 8GB RAM variants with 128GB or 256GB onboard storage with the option of expanding it.

The Galaxy S10E also supports wireless charging and has a 3.5mm headphone jack.  There’s a 3100mAh battery inside to keep the lights on.

India prices and availability will be announced soon.