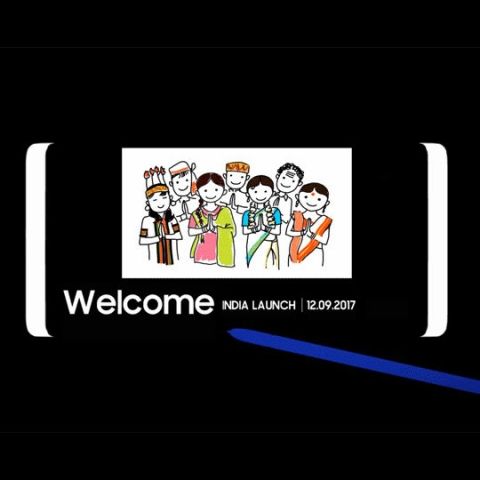 Samsung has confirmed that it will launch the Galaxy Note 8 in India on September 12. In a release, Samsung says the launch event will begin at 12.30PM IST and those interested can watch the livestream on Samsung's India newsroom. Samsung has already started pre-registrations for the Note 8 and the smartphone is expected to go on sale starting September 25.

Samsung Galaxy Note 8 is the successor to last year's ill-fated Note 7 and it is the most premium smartphone yet from the company. The Note8 follows on the Infinity Display design first seen on company's Galaxy S8 series. The smartphone features a 6.3-inch Super AMOLED display with a Quad HD+ resolution of 2960 x 1440 pixels. The display supports always-on display mode with HDR10 certification and Displaymate recently crowned it as the best display on a smartphone.

The Galaxy Note 8 will be powered by company's own octa-core Exynos 8895 chipset coupled with 6GB RAM and option for either 64GB or 128GB or 256GB internal storage. The Galaxy Note 8's headline new features this time around is the new dual rear camera setup.

The Galaxy Note 8 also comes with an improved S Pen for faster note taking and translation feature. Samsung has also added a new feature that allows users to send animated GIF via leading messaging applications. The Note 8 runs Android 7.1.1 Nougat with TouchWiz UI and is backed by a modest 3300mAh battery.

The smartphone supports iris scanning and has a rear-mounted fingerprint sensor, which is not that conveniently placed. The handset is expected to be available in midnight black, maple gold, orchid grey, deep sea blue colour options and some reports suggest a retail price of around Rs 56,000.