Samsung Galaxy Note 8 India launch: Livestream, specifications and everything else to know

Samsung Galaxy Note 8 is the first smartphone from the company to feature dual rear camera setup. It also comes with an improved S Pen and Samsung's Infinity Display design. 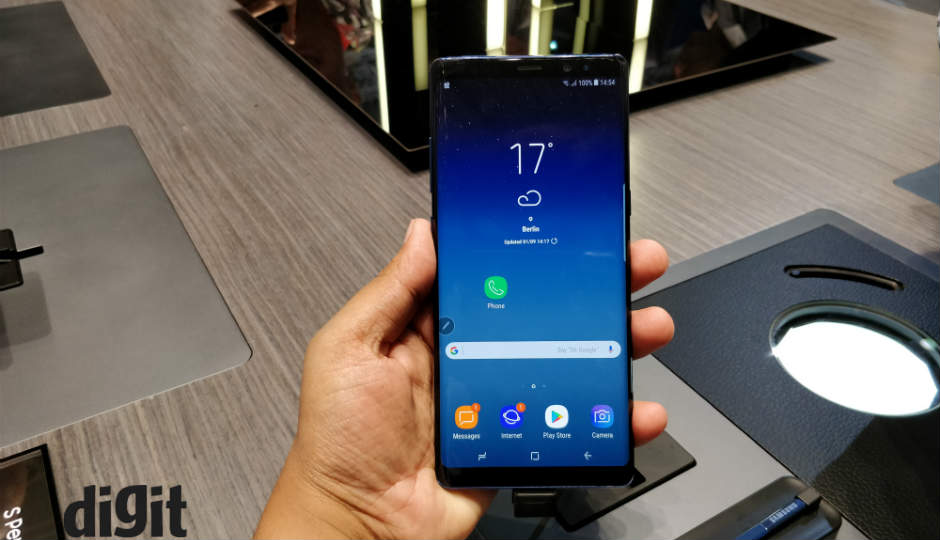 Samsung Galaxy Note 8 India launch: Livestream, specifications and everything else to know

Samsung is set to launch its flagship Galaxy Note 8 smartphone at an event in New Delhi today. The launch is expected to begin at 12.30PM IST and the livestream will be available on Samsung's India newsroom. The flagship device was first announced in New York last month

Ahead of the launch, Samsung has confirmed that the Galaxy Note 8 has broken previous pre-order records in the US and a report said the smartphone has received over 2.5 lakh registrations in India. To recall, the Galaxy Note 8 is the direct replacement to last year's ill-fated Note 7 and will be the first major upgrade to those using Samsung's Note 5 smartphone. The Note 8 continues on the Infinity Design language first spotted on the Galaxy S8 series. The new dual rear camera setup and improved S Pen are its major selling points.

The Galaxy Note 8 features a 6.3-inch Quad HD+ Super AMOLED display with dual curved edges and DisplayMate certified it as the best display on a smartphone. Powering the device will be Samsung's own Exynos 8895 SoC coupled with 6GB RAM and option for either 64GB or 128GB or 256GB internal storage.

The Note 8 is the first Samsung smartphone to feature a dual rear camera setup and it is the first to offer optical image stabilisation on both lenses. It sports dual 12MP rear cameras with one-wide angle lens and another telephoto lens. The setup is capable of shooting pictures with shallow depth of field while the telephoto lens supports 2x optical zoom. It also features an 8MP front camera with wider f/1.7 aperture and autofocus. The S Pen on the Note 8 has been improved to offer a finer tip and support for new features like translation and live message. The smartphone runs Android 7.1.1 Nougat with the company's TouchWiz UI and Samsung has reportedly begun working on an Oreo update. Other features include iris scanner, IP68 water and dust resistance and contactless payment solution called Samsung Pay.

The Note 8 packs a 3300mAh battery, which seems modest in comparison with 3500mAh battery found on Galaxy S8+. The flagship device is currently available for registration and is expected to go on sale starting September 25. The Note 8 is priced at $930 in the US and could be priced close to Rs 56,000 in India.