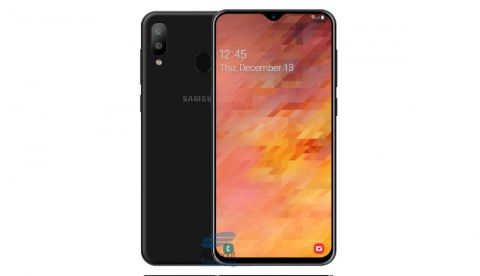 Samsung is rumoured to be working on its Galaxy M series of devices, which could reportedly be announced sometime later this month. We’ve already come across several reports about the alleged Samsung Galaxy M20 and M30 smartphones, and now, the Galaxy M20 has been spotted on FCC. Some more intel on the Galaxy M30 has also surfaced online. Starting off with the Galaxy M20, the FCC listing suggests that the handset could feature a 6.13-inch display with a water drop notch that is expected to house an 8MP selfie camera. The phone might sport dimensions of 156.4 x 74.5 x 8.8 mm and might come with Bluetooth 5.0, 2.4 GHz Wi-Fi and the Li-Po battery EB-BG580ABN, which earlier reports suggest could hold a capacity of 5000mAh.

In another report, some specifications of the Galaxy M30 have also been revealed. Citing sources, AllAboutSamsung claims that same as the Galaxy M20, the Galaxy M30 could also come equipped with a 5000mAh battery. The handset is said to feature a 6.38-inch Infinity-U display with a Full HD resolution of 2220 x 1080 pixels. It is said to feature a triple camera setup on the back with 13MP + 5MP + 5MP sensors, while on the front, it could house a 16MP camera inside the notch. The device’s dimensions are said to be 159 x 75.1 x 8.4mm

While there’s nothing about the Galaxy M20’s cameras on the FCC filing, previous reports suggest that the phone might house dual shooters on the back. It could come equipped with 13MP + 5MP sensors on the back and an 8MP sensor on the front. The phone is touted to run on Samsung’s Exynos 7885 SoC, coupled with 3GB RAM and it could be first announced in some European regions like the UK, Poland, Germany, France, and Scandinavia. It’s not yet known whether the phone will launch in India. In addition, the upcoming device is speculated to be priced under 200 Euros, which approximately converts to Rs 15,985.