Samsung is set to expand its Grand series of smartphones with the new Grand Neo. More details about the rumoured smartphone have hit the web. 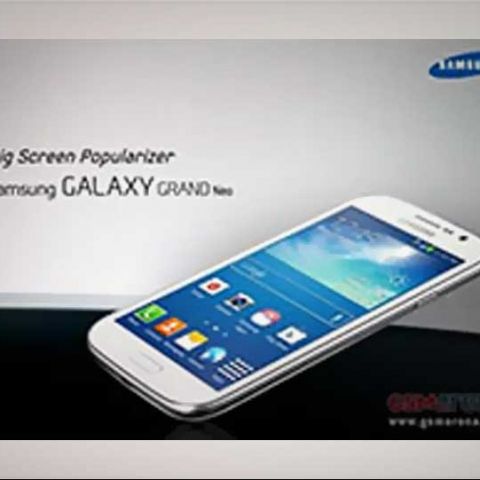 More information about Samsung's rumoured Galaxy Grand Neo smartphone has surfaced on the web via a leaked internal document.

The Samsung Galaxy Grand Neo will come with a 5-inch TFT display with 800 x 480 pixels resolution. The smartphone will be powered by a 1.2GHz quad-core A7 chipset along with 1GB of RAM. It will sport a 5MP camera with LED flash and VGA front facing camera.

The Grand Neo will have 8GB built-in storage and support for additional storage via microSD. In terms of connectivity, the smartphone will support Bluetooth 4.0, HSPA (21Mbps down, 5.76Mbps up), WiFi 802.11 b/g/n, Wi-Fi Direct, micro USB, GPS and GLONASS support. It is expected to come with a 2,100 mAh battery.

Earlier this month, preliminary info about the Grand Neo had surfaced. The smartphone will sit between the Galaxy Grand and the newly launched Grand 2. So far there's no word on the pricing and availability of the smartphone.