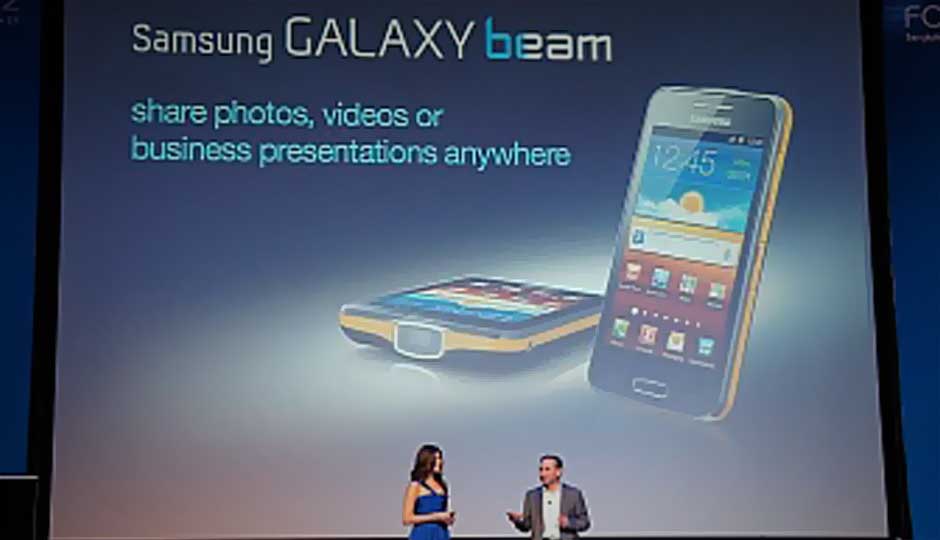 The Samsung Galaxy Beam is powered by a 1GHz dual core processor and has a 4-inch display with a resolution of 480 x 800 pixels. It comes with Android 2.3 preloaded. Speaking of the specs, there is a 5MP rear camera as well as a 1.3MP video call camera. The phone comes with 8GB internal storage with a microSD slot up to 32GB, Bluetooth 3.0, micro USB port, Wireless N and weighs 145 grams. There is a 2,000 mAh battery, providing the juice for all day usage.

However, the real highlight of the Samsung Galaxy Beam is its built-in projector, with 15 lumens brightness. It can project images up to 50-inches. This will be able to play back the media from the internal storage as well as a memory card.

“Galaxy Beam provides mobile freedom, enabling a unique shared experience around digital content for everyone - anywhere and instantly - from a smartphone as slim and portable as any in the market, said Ranjit Yaday, Country Head, Mobile and IT, Samsung India Electronics Pvt. Ltd.

There’s no word on the pricing or whether Android will receive an upgrade anytime soon. The Samsung Galaxy Beam is expected to hit the Indian shores by April this year.