BlackBerry officially announced the touch version of its KEYOne, the BlackBerry Motion smartphone at GITEX Technology Week in Dubai last month and it seems that a BlackBerry KEYone successor is already in the works. A device with model number QUALCOMM BBF100-1, which is the alleged KEYOne successor, was spotted on the popular benchmarking app GeekBench by GSMArena.

To recall, the BlackBerry KEYone sported the model number BBB100-X, where X denotes a number based the region where the smartphone is launched and the report says that the new surfaced device with model number BBF100-1 is most likely its successor “KEYTwo”. As per the listing, the alleged BlackBerry KEYOne successor is powered by a Qualcomm Snapdragon 660 SoC with 6GB of RAM and runs on Android Oreo. The handset scored 1532 in single-core and 4185 in multi-core score test. 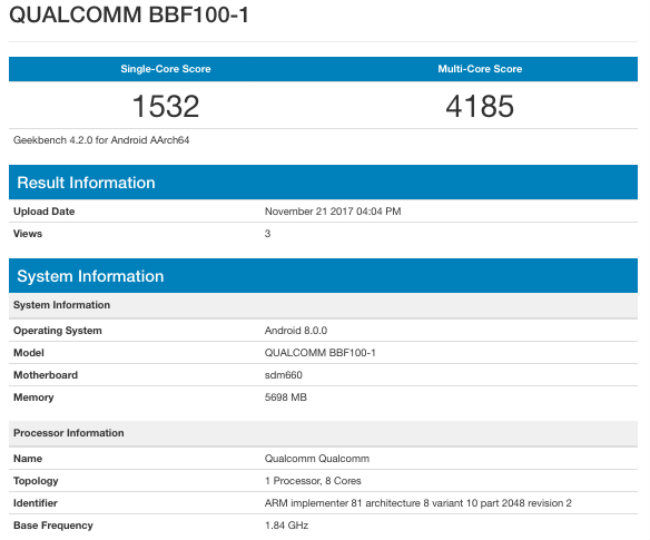 The BlackBerry KEYone was launched back in April 2017. It features a 4.5-inch Full HD IPS display with a 1080 x 1620p resolution and is protected by Corning Gorilla Glass. The smartphone is powered by a 2 GHz Octa-core Qualcomm Snapdragon 625 chipset coupled with 4GB of RAM. It sports 64GB of internal storage, which can be further expanded up to 2TB using a microSD card.

The KEYone features a 12MP rear camera with and comes with an 8MP camera for selfies. It packs a 3505mAh battery and runs on Android 7.1 Nougat. It's a dual SIM smartphone, which is a first for BlackBerry. Connectivity options on the smartphone include GPS, hotspot, NFC, WiFi and Bluetooth.

The lower-half of the KEYone’s display sports a QWERTY keyboard, with the touchscreen housed on top. It features a fingerprint sensor on its spacebar, and the KEYboard supports touch input for scrolling. The phone also supports fast charging, USB Type C port and DTEK security monitoring app.