The incident came to light when the device owner posted images of the burnt Reliance Lyf smartphone, on Twitter. 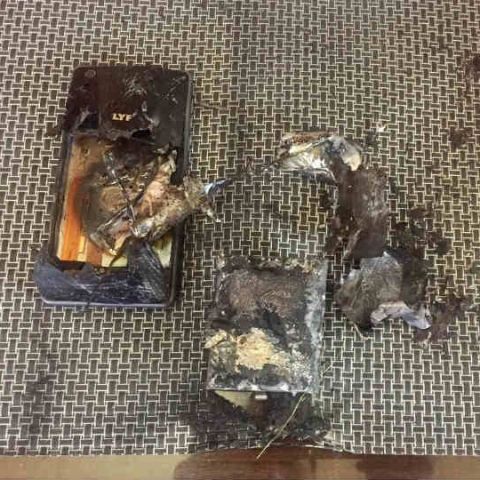 A Reliance Lyf smartphone exploded recently, thankfully without hurting the owner. The incident came to light when owner Tariq Sadiq posted pictures of his burnt device on Twitter. Accompanying the images was a tweet where Sadiq stated that at his family had a narrow escaped after the device erupted into flames. The images show the remains of a phone's rear panel, with the Lyf logo clearly visible. The exact model name is however unclear.

Reliance Lyf’s Twitter handle soon responded to Sadiq’s tweets. Lyf’s social media team wrote, “As discussed we are investigating on this. We will get back to you with further updates.”

Speaking about the incident a company spokesperson told IndianExpress.com, “LYF range of phones are designed and manufactured with global standards by some of the world’s leading manufacturers of mobile phones. Each phone goes through a stringent quality control process. We are concerned about the incident reported in social media and are taking the matter seriously. We are assessing the cause and will conduct a thorough investigation in the matter. Customer safety is paramount to us and, based on our findings, we will take appropriate action.”

This is not the first time that a Lyf device has exploded. In September 2016, Gizbot reported that a Reliance Lyf Water 1 had exploded causing injuries to the user.

Over the last year, smartphones from a number of reputed manufacturers have been at the centre of reports where the devices inexplicably erupted into flames. A few days ago an Apple iPhone 7 belonging to an Australian surfing instructor erupted into flames gutting the interior of his car. South Korean tech major Samsung became an object of censure as multiple reports emerged about the company’s flagship the Samsung Galaxy Note 7 spontaneously exploding. The company had to halt production and eventually ordered a recall of the device.