The new JioPhone 2 shares the same hardware as the JioPhone but it comes with a qwerty keypad. 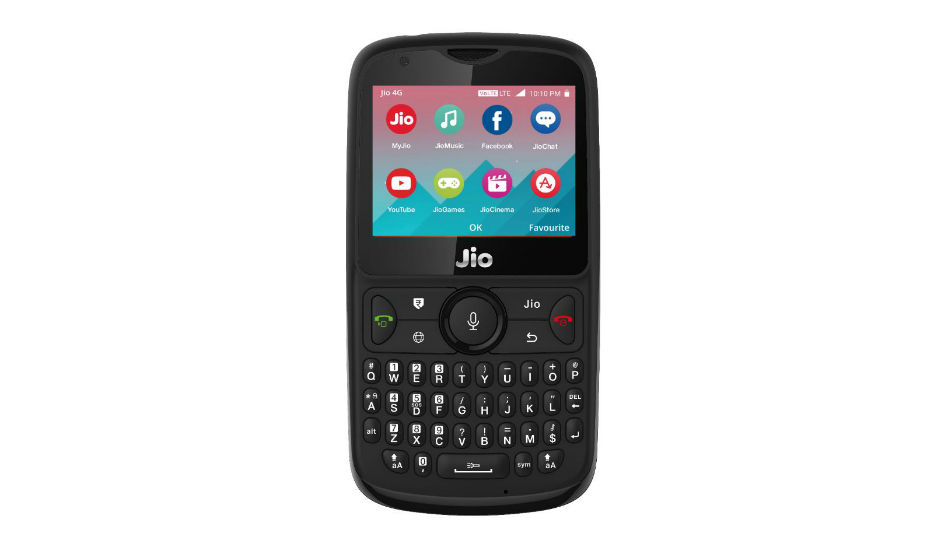 Reliance Jio announced a bunch of new services and devices for consumers at its Annual General Meeting (AGM). One of the key announcements was of the JioPhone 2, which is touted to offer enhanced functionality over the existing JioPhone. It features a 2.4-inch QVGA horizontal display and some new features like support for VoWiFi and evolved Multimedia Broadcast Multicast Service (eMBMS). The JioPhone will also soon be able to run WhatsApp, Facebook and YouTube starting August 15, and the company has also announced a Monsoon Hungama offer for its consumers. Under the offer, one will be able to exchange their existing feature phone for a JioPhone by paying a sum of Rs 501. This offer can be availed from July 21.

Starting off with the JioPhone 2, its specifications are almost similar to the JioPhone. It features a 2.4-inch QVGA display and supports dual SIMs. The device is equipped with 512MB RAM and 4GB internal storage, along with microSD card support of up to 128GB. It sports a 2MP rear camera and a VGA front-facing sensor. The handset comes with a QWERTY keypad with a four-way navigation key, which reminds of us of BlackBerry devices, and is backed by a 2000mAh battery. 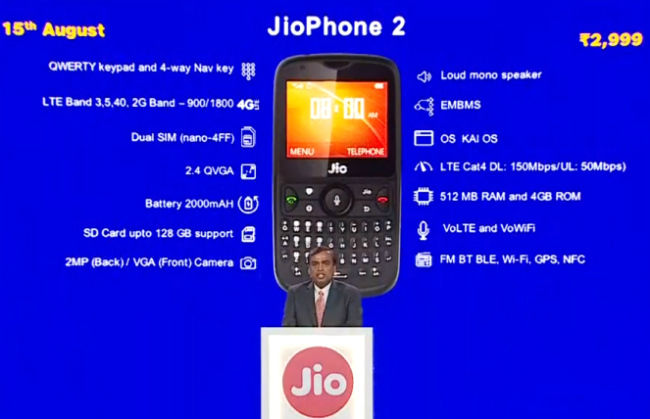 Same as JioPhone, the JioPhone 2 also runs on KAI OS and supports VoLTE. All the features detailed till now are exactly the same as the JioPhone, however, the new handset supports LTE Band 3,5,40, along with 900/1800 MHz 2G bands and eMBMS. The company did not disclose which processor powers the JioPhone 2 but seeing as there are very few hardware changes, it might be equipped with the Spreadtrum SP9820A or the Qualcomm 205 Mobile Platform (MSM8905), same as the JioPhone.

Speaking of the JioPhone, the telco has also announced that from August 15, WhatsApp and YouTube will be available for download on the device. One will also be able to use voice command to boot up the apps and search for videos on YouTube. Facebook is already available for the JioPhone. Going by the demo presented at the AGM, both apps seem to be a simpler version of their full-fledged counterparts. Alongside JioPhone announcements, the company also shared its JioGigaFiber plans, entry in the smart home segment with a plethora of devices and more. You can read what all was announced at the AGM today here.