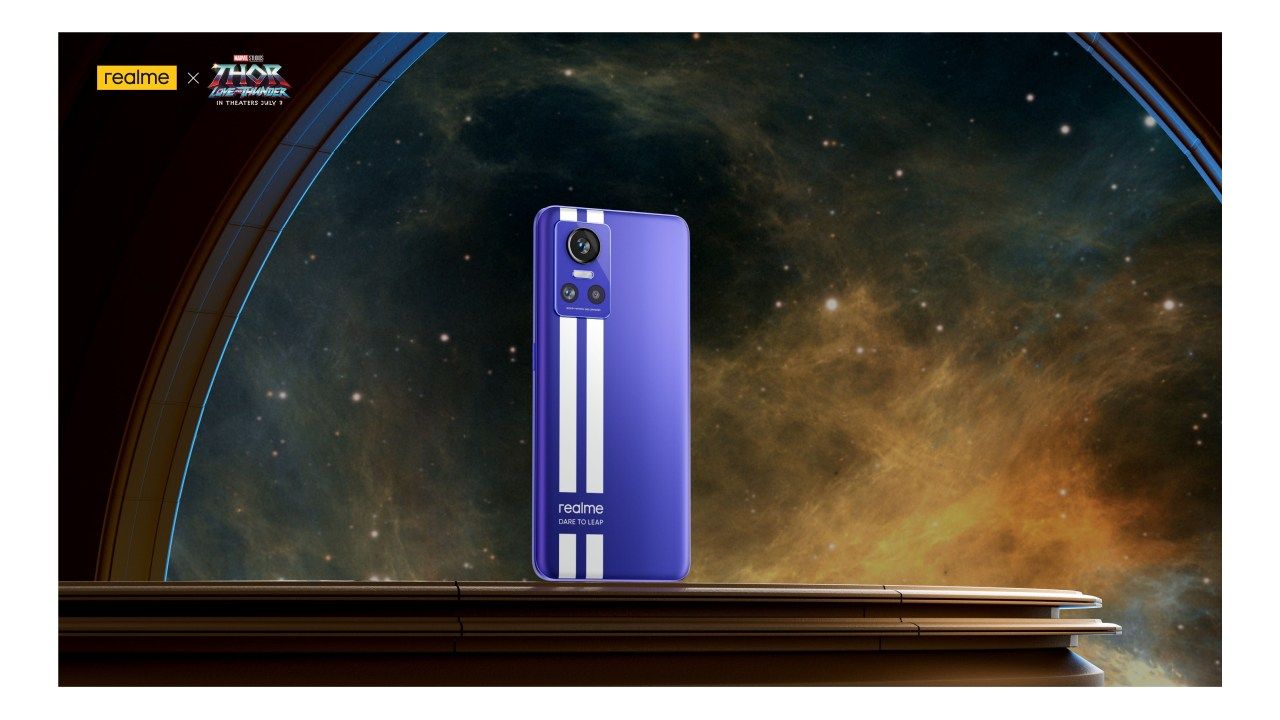 Realme launched the Realme GT Neo 3 150 W Thor: Love and Thunder Limited Edition smartphone in India today. The limited-edition smartphone was designed in collaboration with Marvel Studios and is priced at ₹42,999. The timing is perfect since the highly-anticipated Thor: Love and Thunder film arrives in theatres today as well. The smartphone has nearly the same specifications and internals as the Realme GT Neo 3 that launched in India earlier this year at ₹36,999. It distinguishes itself from the regular variant with a new colour and a new 150 W charger. The box also features some in-box gifts and accessories for Marvel fans.

Are you ready to experience some thunderous technology?
Drop '' to show your excitement in the comments!

The new Realme GT Neo 3 Thor: Love and Thunder Edition smartphone is priced at ₹42,999 for the singular 12 GB RAM and 256 GB ROM variant. It comes in a brand new Nitro Blue colour which attempts to mimic Thor’s colour theme.

The phone will be available to purchase starting July 13 via Flipkart, realme.com, and realme mainline stores. Users can also pre-order the device starting today from realme.com. There’s also a discount of ₹3,000 on prepaid orders that would bring the cost down to ₹39,999.

The Realme GT Neo 3 Thor: Love and Thunder Limited Edition smartphone is essentially the same as the regular variant of the phone. It comes packing a 6.7-inch display with Full HD+ (2412 x 1080) resolution. The screen supports 120 Hz refresh rate and HDR10+. It is topped with Gorilla Glass 5 for protection. 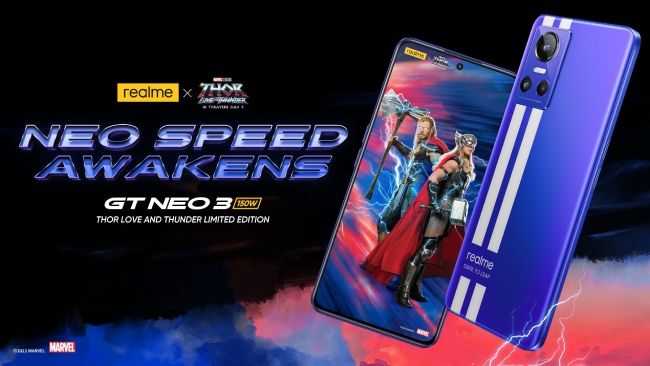 The phone is powered by the MediaTek Dimensity 8100 SoC and comes in a single variant with 12 GB RAM and 256 GB UFS 3.1 internal storage. You get a triple rear camera setup consisting of a 50 MP primary shooter, an 8 MP ultrawide camera, and a 2 MP macro sensor. There’s a 16 MP camera for selfies on the front. The phone draws power from a 4,500 mAh cell with support for 150 W fast charging. Other features include NFC, stereo speakers, and Realme UI 3.0 based on Android 12. Unlike some other special or limited edition devices, the  Realme GT Neo 3 Thor: Love and Thunder Limited Edition smartphone doesn’t come with a special design on the rear panel of the phone. There’s no Thor or Marvel-themed UI as well. What users do get for the extra cash is faster charging, a new colour and some in-box gifts. The phone comes packaged in a Thor: Love and Thunder edition box and it includes a few goodies such as wallpapers, sticker medals, a Thor-themed SIM ejector tool, and themed cards.