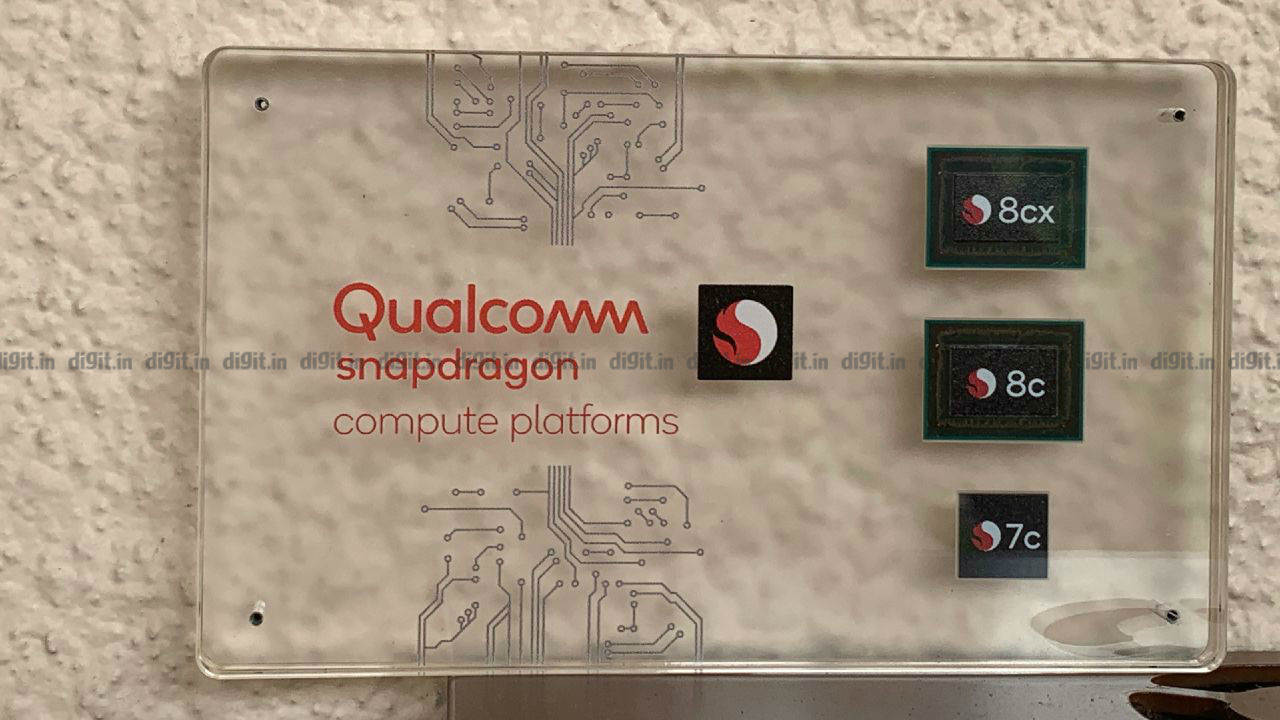 The last day of the Snapdragon Tech Summit concluded with some interesting new announcements. Picking up from where Qualcomm left things last year, the company announced its latest strides in the PC space, particularly for entry-level and mainstream PCs. And, a dash of 5G to the premium tier PCs.

Qualcomm announced the Snapdragon 7c and Snapdragon 8c SoCs for entry-level and mainstream PCs respectively. Both of them are based on ARM architecture and bring LTE connectivity and day-long battery to laptops.

Qualcomm is aiming at educational institutions, and first-time laptop buyers with the Snapdragon 7c. The reference-design laptop showcased in the demo zone was quite thick, much more than the ultra-slim high-end laptops powered by the Snapdragon 8CX chip. It ran up to a speed of 2.4GHz and had 6GB RAM installed.  Using the reference device was quite fun though. It was running a full version of Windows 10 and not a fork with features locked down. We used the Edge Chromium browser, opening websites and playing a video, all of which ran smoothly, but there was a long waiting time.

Moving up the ladder, the Snapdragon 8c is meant for PCs priced below 500$ (roughly Rs 35,000). The SoC is built using a 7nm manufacturing process and uses Kryo 490 CPUs, once again based on ARM-Cortex A76 and Cortex A55 cores, paired with an Adreno 675 GPU. Here, Qualcomm is promising 30 percent improvement in overall performance, as compared to regular mainstream laptops. The Snapdragon X24 LTE modem is inside the chip delivering LTE connectivity and Qualcomm claimed ‘multi-day’ battery life on laptops powered by the chip.

The Snapdragon 8c-based reference device that Qualcomm showcased in the demo room was built like a regular mainstream laptop. The properties menu showed the PC could hit a speed of 2.46GHz and had 4GB RAM installed. It wasn’t very heavy, neither was it as thick as the entry-level laptops running on Snapdragon 7c. It’s also far more capable. We opened a Powerpoint presentation, an excel sheet, played a 4K video and did some browsing, all the same time. Here, the PC did take a long time to open the apps, but once inside, it was all quite smooth. Switching between applications was also hassle-free and there wasn’t much of a lag.

The Snapdragon 8CX SoC that Qualcomm announced last year saw quite a few takers. Samsung, Lenovo and a few more Chinese and Japanese OEMs got onto the bandwagon and launched high-end thin-and-light laptops powered by the Snapdragon 8CX. Yet, none of them managed to make it to India and we are guessing it was primarily because of the prohibitory pricing. That’s expected, considering how new the technology really is, but in a market as cut-throat as India, high-end laptops anyway sell in fewer numbers. The new chips that the company announced on the third day of the summit are meant to address this gap in the market. It’s a way for Qualcomm to scale across multiple price points and particularly aim at emerging markets like India. PCs priced below $300 and $500 are quite popular in India, and if OEMs gets the marketing right, we might finally see ARM-powered always-connected laptops take off in India. No confirmation though.