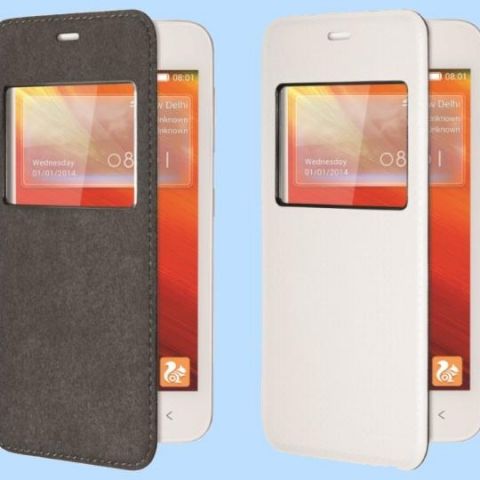 Gionee has launched another affordable smartphone in India called the Pioneer P4S at Rs 7,799. The handset was first unveiled in November last year and is now available across online and offline retail stores in the country.

The Pioneer P4S has a 4.5-inch display with 480 x 854 pixels resolution. It has a quad-core 1.3 GHz processor with 1 GB of RAM. It has 8 GB internal memory expandable up to 32 GB using a microSD card slot. The smartphone has a 5 MP primary camera with LED flash and a 2 MP secondary camera. The primary camera comes with features like Panorama shot, face recognition, geo tagging, and HDR options.

Connectivity options included in the Pioneer P4S are dual-SIM (GSM+GSM) with dual standby functionality, 3G, Bluetooth, Wi-Fi, and GPS. The smartphone is backed by an 1,800mAh battery and runs on Android KitKat.

The Pioneer P4S smartphone comes bundled with a window flip cover that lets users see the date, time and contacts during a phone call. The smartphone comes with the tag line ‘Flip. Enjoy’, and has a feature that allows users to flip the phone and perform various operations like capturing photos, transferring images, listening to music, etc.

The company stated in a press release, "flip the phone to transfer files, get the perfect photo, listen to surround music, stay secured in the cyber world and definitely flip to discover a sexy phone."

Launched at Rs 7799 the Pioneer P4S will compete with the Xiaomi Redmi 2, Lenovo A6000 and Motorola Moto E, which offer a better set of features in the same price range.

Commenting on the launch, Arvind Vohra, Country CEO and MD, Gionee India said, "The Pioneer series has been receiving favorable response from the consumers in India. All the models have been appreciated and the P4S takes the standards a level higher by packing superior features in a good looking smartphone. Gionee has been setting high standards in various aspects and believes in giving the consumers better than the best."