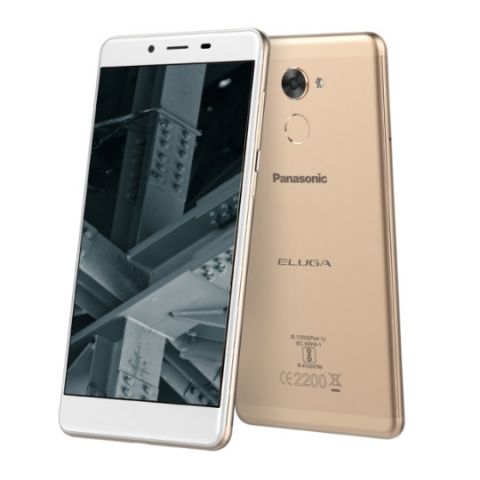 Panasonic has launched the Eluga Mark 2 smartphone in India. Priced at Rs. 10,499, the Eluga Mark 2 will be exclusively available on Flipkart from November 23 onwards. The phone sports a 5.5-inch HD IPS display with 2.5D Asahi Dragontrail glass. It is powered by a 1.3GHz octa-core processor with 3GB of RAM. The device is equipped with a 3000mAh battery and offers 32GB of internal storage that can be expanded by up to 128GB. The Panasonic Eluga Mark 2(₹ 13990 at flipkart) also comes with 13MP and 5MP cameras, and runs Android Marshmallow.

Continuing its vision to deliver innovative technology, Panasonic India adds another feather to its Eluga range with the launch of Eluga Mark 2. Panasonic today officially released the Eluga Mark 2 as a Flipkart exclusive with a price tag of Rs. 10,499/-. The new ELUGA Mark 2 comes with full metal body made with aircraft grade aluminum alloy, giving a glittering look to the device coupled with strength, durability and three times higher heat dissipating capacity.

To take the association to another level Flipkart will be conducting Panasonic Phone Fest from 23rd to 25th  November 2016 on its portal. Exciting deals on Eluga Note, Eluga Turbo and P66 along with exchange offer and a special 10% discount offer on SBI credit and debit cards will be available during this time.

Conveying elegance and panache, the ELUGA Mark 2 gives a bigger and better display, it comes with 5.5”HD IPS screen with 2.5D curved Asahi Dragon Trail glass in the front to give tough look and making it scratch resistant topped with On-Cell Touch technology for a fluid touch experience. Mark 2 sports a 13 MP back camera with 5P lens element for ensuring that maximum light is captured giving a clearer image in darker scenes & a 5 MP 88 degrees wide front camera promising brilliant picture quality.

Appealing to on-the-go professionals, the ELUGA Mark 2 comes with Android™ 6.0 (Marshmallow) with Android-For-Work functionality for enhanced security. It is powered by a 1.3 GHz 64 bit Octa core 4G LTE processor delivering smooth functioning of large sized apps and games. It is supported by 3 GB RAM and 32 GB Internal memory, expandable up to 128 GB by using a SD memory card. It comes loaded with 4G VoLTE technology enabled through Dual SIM (4G/3G+2G) slots and a battery capacity of 3000 mAh li-polymer which ensures the phone is safe and gets a long battery life with the fast charging as an added advantage.

The stylish ELUGA Mark 2 has a finger print sensor at back for enhanced security & exciting features like clicking selfies by just tapping the sensor. It also has an InfraRed sensor which operates numerous infrared based electronic devices like Television, Air Conditioner etc. With USB On -The Go support it can connect additional memory hardware to the phone giving the user an extra edge.

Commenting on the launch, Mr. Pankaj Rana, Business Head – Mobility Division, Panasonic India said, “After receiving a tremendous response for our Eluga Mark device, we are delighted to launch Eluga Mark 2 with full metal body design & finger print sensor. A perfect blend of innovation, style & security, the new Eluga Mark 2 is made with 5.5”HD IPS screen with 2.5D curved Asahi Dragon Trail glass in the front which gives a tough look and makes it scratch resistance for consumers.

He added, “The 3000 mAh li-Polymer battery makes sure that your phone is safe & gets excessively long battery life. Also, super-fast charging is an added advantage of Eluga Mark 2.”

Commenting on the exclusive launch with Flipkart Mr. Ajay Yadav, VP – Mobiles at Flipkart said, “We are happy to announce the exclusive launch of Panasonic Eluga Mark 2 on Flipkart. It is great to have Panasonic which has been a pioneer in electronics partnering with us to expand the reach of their latest smartphone. With increasing demand for 4G VoLTE, metallic body and fingerprint enabled smartphones online, we are confident that the Eluga Mark 2 will gain popularity and expand shopper’s choice of phones in the segment.”

The smart ELUGA Mark 2 priced at Rs. 10,499, and will be exclusively available on Flipkart website from 23rd November onwards.