OnePlus 5T, the upcoming bezel-less display smartphone from the Chinese upstart, has been spotted on GFXBench ahead of official launch. OnePlus co-founder Carl Pei has confirmed that the OnePlus 5T is in the works and will retain the 3.5mm audio jack. With the likes of Apple and Google ditching the audio jack, the company went ahead to post a detailed blog post on why they plan to retain the headphone jack. The company has also teased on Twitter that the smartphone will be announced in New York City.

Noted tipster Evan Blass had recently tweeted a picture of the top half of the device, revealing a design with thinner top and bottom bezels. The listing on GFXBench spotted by Techiestate reveals some of the specifications that were being previously speculated on China's micro-blogging platform Weibo. The listing shows the smartphone will carry the model number A5010 and feature a large 6-inch display with a Full HD+ resolution of 2160 x 1080 pixels. The use of a taller resolution means that the smartphone will support an 18:9 aspect ratio, also seen on smartphones like Oppo F5 and Vivo V7+. 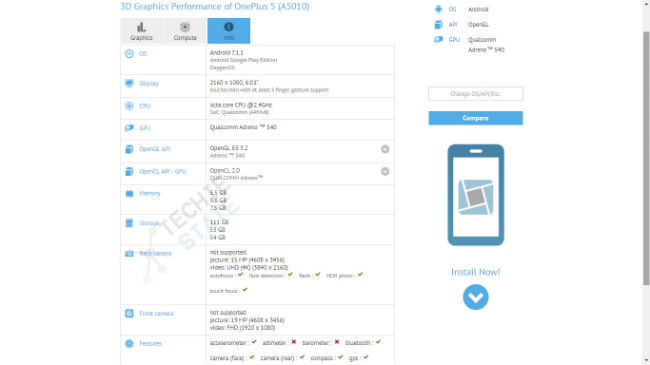 The smartphone is expected to be powered by Qualcomm's Snapdragon 835 chipset and launch in two storage options: 6GB RAM variant with 64GB storage and 8GB RAM variant with 128GB internal storage. With Qualcomm not upgrading its Snapdragon mobile platform for the second half of 2017, the company is sticking with the same internals also found on the existing OnePlus 5. As far as the camera setup is concerned, the smartphone is expected to retain the dual camera system with a 16MP primary sensor and a 20MP secondary sensor. However, the GFXBench listing shows only the 16MP primary sensor in the rear camera setup. The company is likely planning to bump the front camera from 16MP to 20MP, while the overall specifications and design seem similar to that of the Oppo R11s which was launched in China last week.

To recall, the OnePlus 5 was based on the Oppo R11 and it won't be surprising if the OnePlus 5T is based on the Oppo R11s. There is no clarity on the battery capacity of the device, but it will support Dash Charging and not wireless charging. Pete Lau, Founder and CEO of OnePlus believes there is no need for wireless charging till the time the company supports Dash Charge for wireless fast charging. There is no official word on the launch date of the OnePlus 5T, but most rumours point to November 16 as the possible date and a retail listing suggested a starting price of $549 (around Rs 36,000).