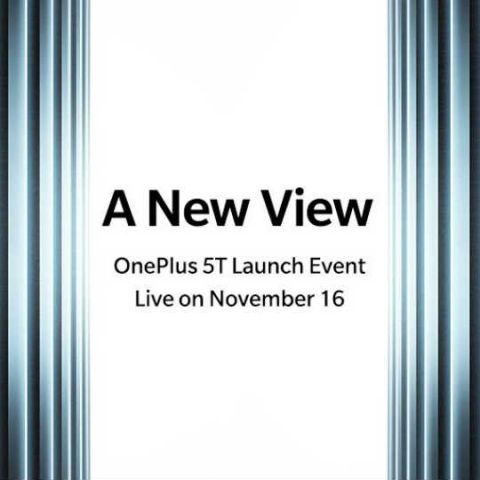 OnePlus 5T, the redesigned flagship smartphone from OnePlus will be officially launched on November 16. After several leaks about the purported launch date, OnePlus has now tweeted that the smartphone will become official at an event in New York on November 16. The launch is scheduled to start at 9.30PM IST and it will be available exclusively on Amazon India.

OnePlus, the company known for creating massive hype ahead of the launch of its devices is going for a subdued stance this time around. The launch teaser reads "A New View" strongly suggesting a switch to a new design with thinner top and bottom bezels. The smartphone is expected to sport a design similar to that of recently launched Oppo R11s and pack a 6-inch Full HD+ display with a resolution of 2160 x 1080 pixels.

The smartphone had appeared in GFXBench listing recently suggesting it will sport hardware specifications similar to that of outgoing OnePlus 5. Under the hood, it will get Qualcomm Snapdragon 835 chipset and will be offered in two storage variants: 6GB RAM model with 64GB storage and 8GB RAM model with 128GB internal storage. The smartphone is also expected to retain the dual rear camera system with a 16MP wide-angle lens and 20MP telephoto lens. However, the company might replace the 16MP front camera with new 20MP selfie camera also seen on Oppo R11s and Oppo F5.

OnePlus has already seeded the Android 8.0 beta based on OxygenOS to OnePlus 3 and OnePlus 3T beta users. The OnePlus 5T is expected to launch with Android 8.0 Oreo out of the box and will be rolled out to OnePlus 5 as well. There is no clarity on the battery capacity just yet but the company says there is no need for wireless charging when the smartphone supports company's proprietary Dash Charge technology.

OnePlus has also confirmed that OnePlus 5T will retain the 3.5mm headphone jack, despite the fact that industry leaders Apple, HTC and even Google have dropped the proprietary audio jack. A retail listing suggested the smartphone will retail at a starting price of $549 (around Rs 36,500). The company has confirmed the phone will go on sale in North America and Europe starting November 21 while China gets the device from December 1. In India, OnePlus will hold an early bird sale on November 21 while official sales will begin from November 28.