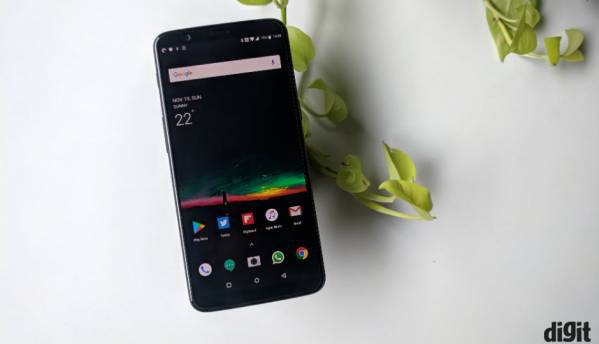 OnePlus 5T, the updated flagship smartphone from the Chinese hardware company went on its first sale on November 21. The company has now confirmed that the OnePlus 5T broke its previous launch day sales record in just 6 hours. The demand for the device seems phenomenal if OnePlus' data is to be believed. The company did not share any specific numbers on the total units sold in India.

The OnePlus 5T is only available in a 64GB variant across most regions, while the shipments of the 128GB variant are delayed by a few days. In the US and Canada, the OnePlus website shows that both the variants are delayed by around 8 days. As always, OnePlus 5T seems to be getting major traction in India with the 64GB variant being the most popular model and Amazon India limiting orders to 1 per customer.

The OnePlus 5T retains the hardware specifications of its predecessor, OnePlus 5, except for its tweaked design, lack of a physical home button, and updated camera. The design is based on Oppo R11s with thinner top and bottom bezels and higher screen-to-body ratio. The smartphone features a 6-inch Optic AMOLED display with a Full HD+ resolution of 2160 x 1080 pixels. The display sports a new, taller aspect ratio of 18:9 and is protected by Corning Gorilla Glass 5 on top.

The OnePlus 5T is powered by Qualcomm's Snapdragon 835 chipset and can be purchased in either 6GB RAM, 64GB storage option or 8GB RAM, 128GB storage model. With the OnePlus 5T, the company is also tweaking the camera with the focus shifting from optical zoom support to enhanced low-light photography. The smartphone uses same 16MP + 20MP dual camera setup but both the lenses support wide f/1.7 aperture. OnePlus highlights that the secondary sensor kicks in when the ambient lighting drops to 10 lux and has also added portrait mode for shooting pictures with shallow depth of field. OnePlus is retaining the same 16MP selfie camera with electronic image stabilisation.

With the OnePlus 5T, the company is also retaining the 3.5 mm headphone jack, a proprietary port abandoned by Apple, Google, Huawei among others. The smartphone features a rear-mounted fingerprint sensor and supports connectivity options like Wi-Fi 802.11ac, Bluetooth 5.0, GPS, NFC and 4G LTE. The smartphone runs Oxygen OS based on Android 7.1.1 Nougat and will get Oreo beta later this month. The device is backed by a 3300mAh battery and supports Dash Charge through a USB Type-C port.

The OnePlus 5T is priced at Rs 32,999 for the 6GB RAM variant and Rs 37,999 for the 8GB RAM model. The smartphone will be available at 12 noon on November 24 as part of the second early access sale. The handset gets Rs 1,500 instant discount with HDFC Bank Debit and Credit Cards and 1000GB 4G data for 18 months from Idea Cellular. Read our full review here.