The Nokia Lumia 920 has an 8.7MP rear camera and a 1.2MP front-facing camera. Its camera sports a floating-lens technology and offers optical image stabilization which is a first for smartphones. 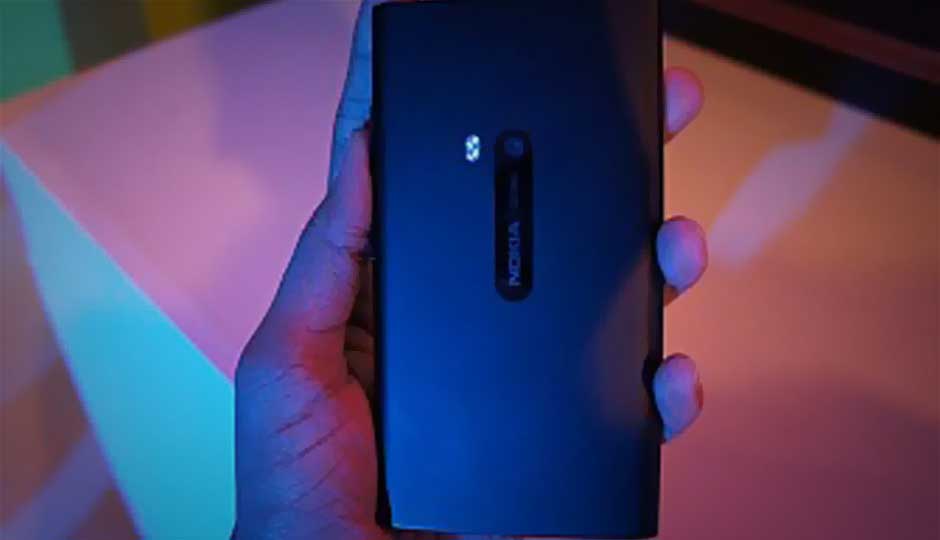 The Nokia Lumia 920 has an 8.7MP rear camera and a 1.2MP front-facing camera. Its camera sports a floating-lens technology and offers optical image stabilization which is a first for smartphones.

We compared the Lumia 920 against HTC’s flagship WP8 device – the HTC Windows Phone 8X (which we've reviewed). As you will see in the accompanying video, the two phones were pitted against each other on two parameters – shooting pictures in low light conditions and image stabilisation while shooting video. Although the test conditions weren’t ideal (and we’d like to reserve our final judgement till we get the 920 in for a full fledged review) it was pretty obvious that the Lumia’s camera fared better. In the demo area there was a dark room created with minimal lighting and a flower vase as the subject.

Participants at the press conference got a chance to click pictures through the viewing window (as you will see in the video) to test low light photography. Again the Lumia 920 came out ahead. Although both cameras sport the back-side-illuminated sensor and the same aperture opening, the Lumia 920 gives more in terms of quality in low-light shooting. We attribute this to the sensor size. Strangely enough there were no details on the sensor size of the Lumia 920, but a quick online search reveals it to be ⅓-inch sensor (5x3.5mm) which we are guesstimating to be larger than HTC Windows Phone 8X’s sensor (no official details available).

The Lumia 920’s camera gives you two other interesting features called Smart Shoot and Cinemagraph. Many times, specially in very crowded places or tourist hotspots, while clicking photographs, you end up capturing a random stranger who just passes between the camera and the subject – an unintentional photobomb of sorts. With Smart Shoot, the Lumia phone detects any motion in the frame, and selects the area which can be removed from the frame.

Cinemagraph basically allows you to animate certain sections of your images. It is like a glorified GIF. Glorified because you can adjust the areas that you want to be animated and in effect create those fabled Harry Potter-esque moving pictures of the wizard world. Quite a nifty feature.

On a side note, another peculiar thing that we noticed while fiddling around with the 920 was that you could operate the touch screen with just about any object - from your fingernail to the back of a standard pencil. This can be attributed to the Synaptics layer built into the phone. While it was interesting to see this, our concern quickly went to accidental operations happening in your pocket. But that’s something we won’t know until we get the phone in for review. So stay sharp, stay tuned and watch this space.

You can see our comparison between the Apple iPhone 5 and the Nokia Lumia 920's optics, here.