Touted as the most affordable 4G phone with Windows Phone 8.1, the Lumia 638 will be competing against a range high spec'd smartphones under Rs. 10,000 category. 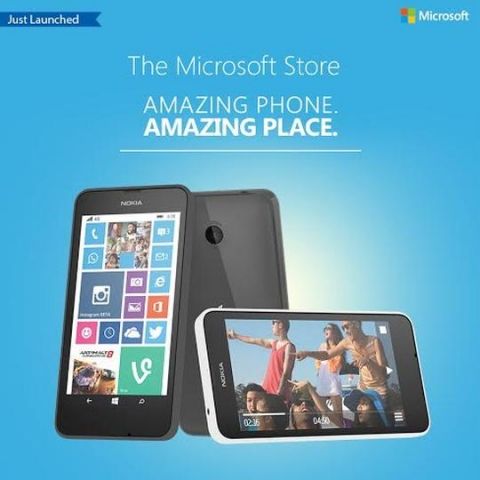 Microsoft has launched its Nokia Lumia 638 smartphone in India. Touted as the most affordable 4G smartphone on Windows Phone 8.1, the Lumia 638 will be exclusively available via Microsoft Brand store at Amazon.in, while the prebooking starts December 17.  The smartphone is priced at Rs. 8,299.

The Nokia Lumia 638, recently unveiled in China, has a 4.5-inch FWVGA LCD display. It is powered by a 1.2GHz quad-core Qualcomm Snapdragon 400 processor along with 1GB of RAM. Other features of the smartphone include 5MP rear camera, 8GB of built-in storage and a micro SD card slot for storage up to 128GB. Connectivity options include 4G LTE, 3G HSPA+ 42Mbps (Dual Carrier) , WiFi 802.11 b/g/n, Bluetooth 4.0, GPS. An 1830 mAh battery powers the device.

The new Lumia 638 comes bundled with an exclusive offer on Airtel 4G. Microsoft says Lumia 638 consumers on Airtel Post-paid in Bengaluru get access up to 5 GB of free data on 4G for 2 months post activation of their Airtel SIM on the new Lumia 638. The offer will be available  until 31st March 2015.

Raghuvesh Sarup, Director – Marketing, Nokia India Sales Pvt. Ltd. (a subsidiary of Microsoft Mobile Oy), says, “With the Lumia range we have always focussed on delivering new experiences and features to our consumers at affordable price points. Now,we are introducing Lumia 638 which is the most affordable 4G smartphone on Windows Phone 8.1. It builds on the success of the Lumia range in the fast growing affordable smartphone segment and aims to address the consumers’ demand for a device that lets them enjoy uninterrupted video content.”

Ram Narayan Iyer, Group Director - Retail, Sales and Marketing, Microsoft India says, “Exclusive products and great deals are key differentiators of the Microsoft Brand Store. Given the increasing demand for Lumia smartphones in India, and with more and more consumers choosing to shop online, we are very excited to announce availability of the Lumia 638 exclusively on our store. The Lumia 638 is the first product to be available exclusively on the Microsoft Brand Store.”