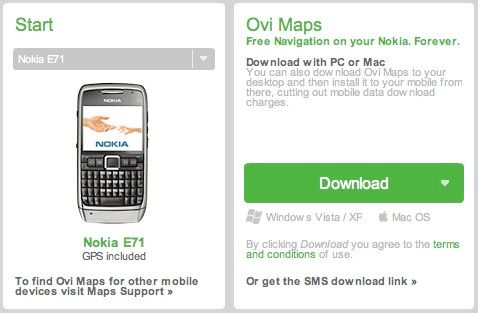 Nokia says “You spoke, we listened”. And now, Nokia offers owners of their two very popular business handsets - Nokia E71 and Nokia E66 - “free walk and drive navigation” in the form of the latest version of Ovi Maps.

This great and absolutely free feature has been available on Nokia N72, Nokia N97 mini, and Nokia X6 phones since January, but as the process of “back porting” the Ovi Maps application to the "existing devices" of E71 and E66 was quite difficult, it took Nokia this long to provide the feature. However, users of Nokia E71 and Nokia E66 will not be able enjoy the full functionality of the Ovi Suite, and will go without premium content, such as Guide Michelin and Lonely Planet, that other (see the full list of compatible phones) users enjoy. This is because the E71 and E66 phones run on the slightly dated S60 3.1 (3rd Edition Feature Pack 1) platform, compared to the other phones that run on more recent platforms.

All users of the latest version of Ovi Maps will also be able to “side load the latest country maps onto their devices so they can enjoy offline map browsing alongside free navigation”. The update/app is available at www.nokia.com/maps and on the Ovi Store. The application will be installed using the Ovi Suite.
List of Nokia phones that are fully compatible with the latest version of Ovi Maps: Nokia N97, Nokia N97 mini, Nokia 5800 XpressMusic, Nokia 5800 Navigation Edition, Nokia E52, Nokia E55, Nokia E72, Nokia 5230, Nokia 6710 Navigator, Nokia 6730 classic, Nokia X6, Nokia N86 8MP. Limited compatibility: Nokia E71 and Nokia E66.