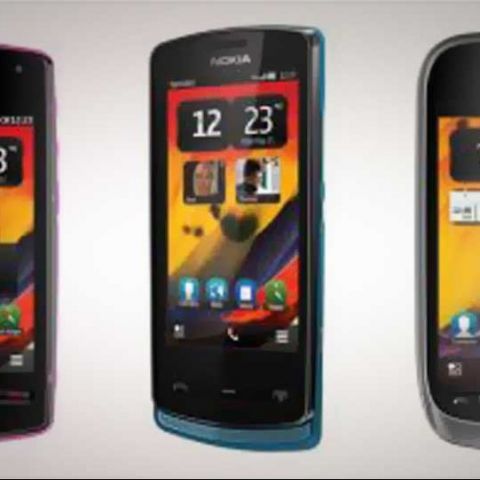 Nokia yesterday launched three new Symbian Belle smartphones in India with NFC technology, the Nokia 600 (left), Nokia 700 (centre), and Nokia 701 (right). To create a unique and engaging experience around ‘Just Tap’ with NFC feature on the Symbian Belle devices, Nokia has tied up with the upcoming Shahrukh Khan film, Ra.One.

Here are some of the highlights of the three new Symbian Belle devices:

Weighing 96gm and at 110 x 50.7 x 9.7 mm, the Nokia 700 isn’t just the smallest Nokia Symbian smartphone, it is also the most compact touch monoblock smartphone in the world, claims Nokia. It has a 1Ghz processor, 3.2 inch AMOLED screen ClearBlack display, 2GB of internal memory (with the option of using a 32GB microSD card for a total of 34GB), HD video capture and 5MP full focus camera with LED flash. Obviously, it features the new single tap NFC pairing and sharing capabilities.

The Nokia 701 is a slim smartphone incorporating the world’s brightest ever mobile phone display, based on a 3.5 inch ClearBlack display that makes it perfect for indoor and outdoor use, according to Nokia. Based on the popular Nokia C7 design, the Nokia 701 smartphone has a 1 GHz processor, 8 MP full focus camera with dual LED flash and 2X digital zoom, second front-facing camera and HD video capture. It comes with 8 GB internal memory and the possibility to increase to 40 GB by installing a 32 GB microSD card.

The phone also has active noise cancellation and provides single-tap NFC pairing and sharing capabilities, allowing content to be shared and sound to be streamed wirelessly to headphones and NFC-enabled speakers.

Available at a lower price point than the Nokia 700 and Nokia 701, the Nokia 600 still comes with a 1 GHz processor; 5 MP full focus camera with LED flash and HD video capture, and 2 GB of internal memory with ability to increase to 34 GB using a 32 GB microSD card.

The Nokia 600 Symbian Belle smartphone is seemingly Nokia’s loudest at 106 Phons. With built-in FM radio antenna for listening to radio without headphones and FM transmitter that makes it possible to broadcast music from your phone to any FM radio, the Nokia 600 caters to the audiophile smartphone niche. The Nokia 600 smartphone claims up to 60 hours of music playback time, a powerful loudspeaker and the ability to also stream music wirelessly to NFC-enabled accessories.