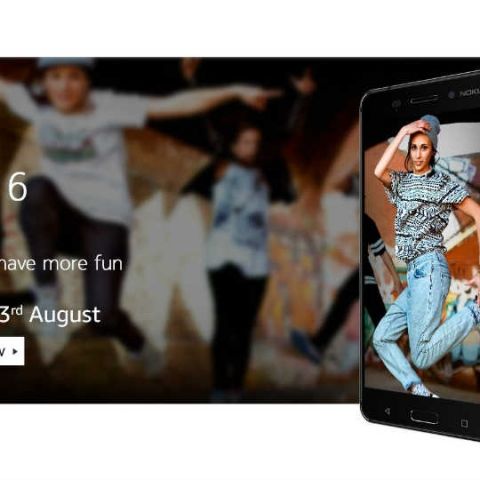 Nokia 6(₹ 13999 at flipkart), HMD Global's premium mid-range smartphone will go on sale on August 23 at Rs 14,999. Amazon India, the online partner for the brand, has commenced registrations for the device, confirming that the smartphone will be available on that day. The Nokia 6 was announced alongside the Nokia 3 and the Nokia 5 in India on June 13 and was initially said to become available starting July 14, but the date has now been pushed back to August 23.

Amazon India says that only registered customers will be eligible for the Nokia 6 sale on August 23. The e-commerce giant is also offering Rs 1,000 cashback to its Prime subscribers in the form of Amazon Pay balance. Further, customers signing in to the Kindle app will get 80 percent off on Kindle eBooks. Other offers include Rs 2,500 off on hotels and flights from MakeMyTrip and 45GB free data for 5 months on Vodafone.

In terms of specifications, The Nokia 6 sports a 5.5-inch Full HD laminated LCD display with Corning Gorilla Glass protection. Powering the device is Qualcomm's Snapdragon 430 platform coupled with 3GB RAM and 32GB expandable storage. The Nokia 6 sports a 16MP rear camera with f/2.0 aperture lens and phase detection autofocus. There is an 8MP front camera with f/2.0 aperture lens and an 84-degree field of view.

The Nokia 6 runs Android 7.1.1 Nougat with the latest security update and HMD Global has promised to offer the Android O update once it becomes available from Google. The device sports a 3.5mm audio jack and has dual speakers certified by Dolby Atmos. The handset is backed by a 3000mAh battery and will be available in Matte Black, Tempered Blue and Silver colour variants.