Nokia 2, the rumoured entry-level Android smartphone from HMD Global has now appeared on GeekBench benchmarking platform. The GeekBench listing arrives just days after the handset was leaked in the form of renders.

The Nokia 2 is expected to be placed below Nokia 3 in the price spectrum and rumours suggest it will be powered by either Snapdragon 210 or Snapdragon 212 chipset. The GeekBench listing hints at use of Snapdragon 210 chipset but the newer Snapdragon 212 is more likely to make the cut. The listing also reveals that Nokia 2 comes with just 1GB of RAM and runs latest Android 7.1 Nougat. The listing doesn't reveal the internal memory but Nokia 2 scored 422 in single-core test and 1146 in multi-core test.

Nokia 2 had leaked in the form of renders alongside a rough sketch of Nokia 3 few days back. The render showed the handset would sport a 5-inch display similar to Nokia 3 and sport a design similar to Lumia 620 with rounded edges. The Nokia 2 is also said to adopt on-screen Android navigation buttons as opposed to normal Android buttons found on company's other handsets. 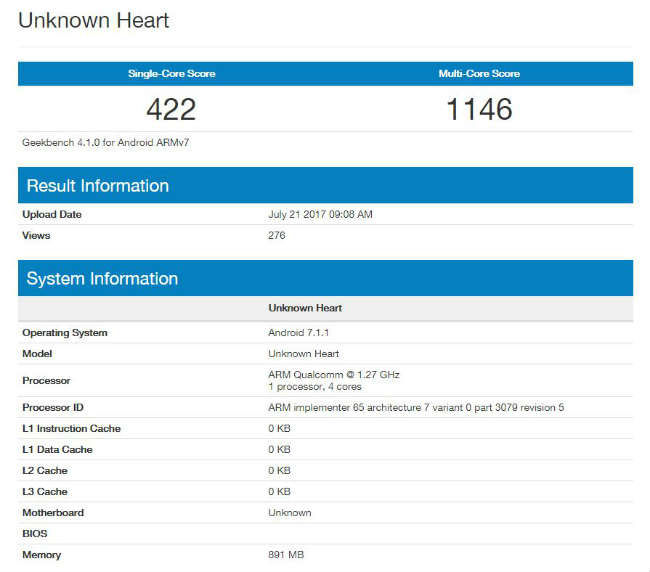 HMD Global started sending media invites for an event in London on August 16, where it is expected to announce the flagship Nokia 8 smartphone. The handset is expected to sport a 5.3-inch Quad HD display, Snapdragon 835 SoC, 4GB RAM and 64GB storage. The smartphone is also expected to offer dual rear camera setup with Carl Zeiss optics.

With Nokia 2 having hit benchmark platform, there is a possibility that the handset could be announced at August 16 event. HMD Global is currently selling Nokia 3 smartphone in India and is expected to commence sales of Nokia 5 from next month. Amazon India has begun registrations for Nokia 6, the premium mid-range smartphone and it will go on sale starting August 23.