Motorola is reportedly working on two new devices with Quad HD resolution and will have Qualcomm Snapdragon top processor. Currently the two handsets are being tested in the US by the Verizon.

According to reports the new models will be part of the DROID range that will remain exclusive to Verizon over in the US, one of them being known as “Clark”, and the other is called “Kinzie”. The Moto XT1578 model number codenamed Clark has a 5.25" QHD screen with 1440 x 2560 pixels resolution and a pixel density of 560 ppi. It is powered by the Qualcomm Snapdragon 808 chipset with a hexa-core CPU and runs Android 5.1.1 Lollipop. 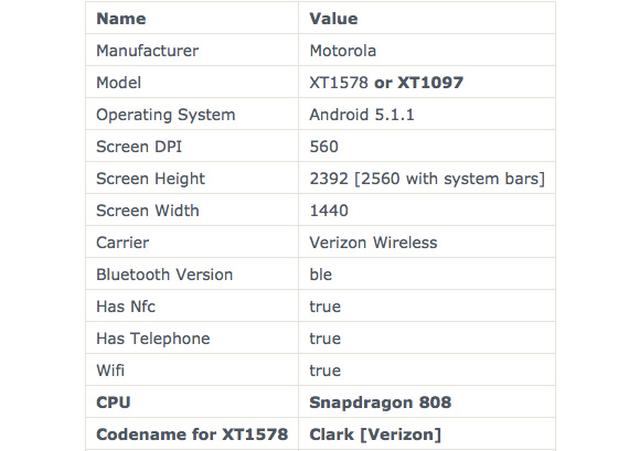 The other handset with the Moto XT1585 model number is codenamed Kinzie. The device has a 4.6 inch QHD display and has a higher pixel density of 640 ppi. It will have a Qualcomm Snapdragon 808 processor and run Android 5.1.1 Lollipop OS. According to reports the Kinzie model will come with a new “unbreakable” display, however Motorola has not made any official announcement yet. 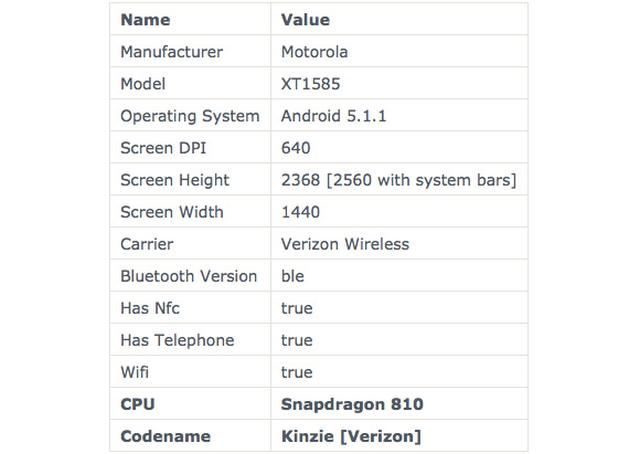 Motorola is also working on a third smartphone with the Model Number XT192A which will have a 2K QHD display. Other rumoured specifications of the device include Bluetooth LE support and Android 5.1 Lollipop. The device will also run on Verizon’s network. Battery details of the device have not been revealed yet.

Apart from these Motorola is also working in its flagship Moto X 3rd generation smartphone which will have a 5.2-inch QHD AMOLED display and Corning Gorilla Glass Protection. The smartphone will feature a 16 MP primary auto focus camera with OIS as well as a 5 MP secondary camera. It will have an inbuilt accelerometer, gyroscope, proximity sensor, barometer and compass sensors. The handset is expected to be powered with Snapdragon 808 processor with 4 GB of RAM, Android 5.1.1 and will be backed by a 3280mAh battery with Quick Charge 2.0. The smartphone is expected to be launched in this year in August or September.

What do you think about the next generation of Motorola Devices? Share your views in your comments section below.