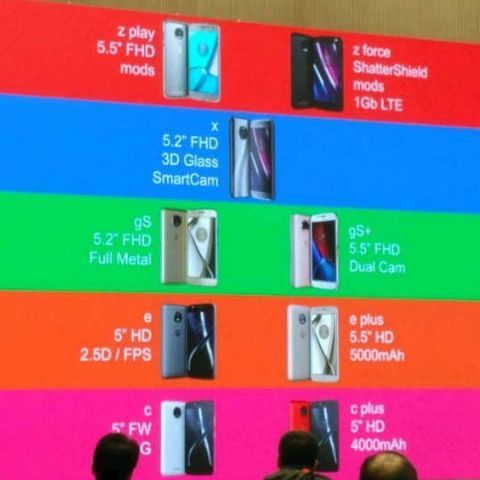 Motorola is already rumoured to be working on new entry-level C series and updated versions of E series and Z series handsets for 2017. Now, Evan Blass has shared an image that details the remaining devices that the company may launch in 2017 . The leaked presentation slide details the company's upcoming 'c', 'e', 'g', 'X' and 'Z' series of devices. While there is no word on pricing or official announcement, the slide does share details like specifications and their tagline.

Last year, Motorola introduced its first modular smartphones under the Z series as company's flagship lineup. The 2017 Moto Z series is expected to include the Moto Z Play and Moto Z Force and is being touted as a smartphone with 'Unlimited Capabilities'. The Moto Z2 Play, which has already leaked in the form of renders may offer a 5.5-inch full HD display along with support for MotoMods. The Z2 Force, on the other hand, is tipped to offer a shattershield display, MotoMods support and gigabit LTE chipset.

Motorola's last X series device came in the form of Moto X Style and Moto X Play in 2015. The company is now expected to relaunch the series with Moto X4 tagged as 'Unlimited Perfection'. The handset sports a 5.2-inch Full HD display with 3D glass and SmartCam. The 2017 X series could be priced slightly higher than the existing G-series.

Lenovo-owned Motorola has already announced the 2017 Moto G lineup with the launch of the G5 and G5 Plus and the leaked slide suggests the company might add gS and the gS+. The gS features a 5.2-inch full HD display with metal unibody design while gS+ opts for a larger 5.5-inch full HD screen with dual-rear camera setup. The series branded as 'Unlimited Premium' might be aimed at similar offerings from other Chinese smartphone makers.

Motorola's upcoming 'e' series has been spotted on the Geekbench benchmarking platform and has received FCC certification. The handset's specifications and pricing have also leaked in the past and the latest leak reveals the handsets may be available in two different screen sizes and will be pitched as the 'Unlimited Value' smartphone. The Moto e4 is expected to feature a 5-inch HD display with 2.5D glass and a fingerprint sensor. The e4 Plus may offer a larger 5.5-inch HD display and a 5000mAh battery. Finally, the Moto C series is tagged as 'Unlimited Essentials' and mayber the company's entry-level Android device. The Moto c and c Plus are expected to feature a 5-inch FWVGA display and a 5-inch HD display respectively. According to the slide, the c Plus will offer a 4000mAh battery.