According to reports, Motorola will be launching a new budget Android smartphone called the Moto E. The new smartphone is expected to be priced similar to the Moto G that the company successfully launched earlier this year.

Moto E is said to sport a 4.3-inch display with 720 pixels display. It will have a 1.2 GHz dual-core processor coupled with 1 GB of RAM. The budget smartphone will have 4 GB of internal memory expandable via microSD card slot.

The smartphone will feature dual-SIM capability with dual-standby. It is also said to run on the latest Android 4.4 Kitkat OS out-of-the-box. Moto E is said to feature a 5 MP rear camera and no details have been mentioned about the front camera. The leaked specs suggest that the smartphone will pack a 1900mAh battery. The smartphone will be just 6.2 mm thick according to rumors and is expected to launch in May. 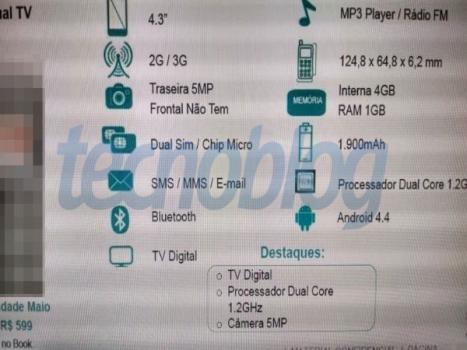 Recently Motorola launched the Moto G in India for Rs 12,499 via e-commerce retailer Flipkart. The Moto G has a 4.5-inch display with 720p resolution. It runs Android 4.3 Jelly Bean OS upgradable to Android 4.4 KitKat OS. The smartphone has a quad-core 1.2G Hz Qualcomm Snapdragon 400 processor coupled with 1GB RAM. It has a 5 MP rear camera with LED flash and 1.3 MP front camera. Connectivity options included are GPRS, EDGE, 3G, Bluetooth 4.0, Wi-Fi 802.11 b/g/n, Wi-Fi hotspot and microUSB. It pack a 2070 mAh battery. Motorola is also working on a rugged version of the Moto G called Moto G Forte. The smartphone has similar specs as the Moto G apart from the rugged Grip Shell body.