Motorola has launched three new dual-SIM phones in India, starting from Rs. 3,590. Called slim and stylish by Motorola, the three feature phones bear Motorola’s proprietary operating system, not Android, and support dual-SIM of the GSM-GSM type. All three phones are available at select outlets in select cities in India.

Two of the three devices, the Motorola EX119 and EX109, are candy bar QWERTY handsets, while the last – the Motorola EX212, is a flip design reminiscent of yesteryear’s Razr. Read on for more details about the new Motorola dual-SIM devices. All three are also pictured below.

Speaking on the launch of the three devices, Rajan Chawla from Motorola Mobility commented:

“The fast evolving dual-SIM market in India is a driving force for us. We are glad to bring these innovative, feature-rich mobile phones in varied designs and form factors to the Indian consumer…. We focus strongly on the consumer and thanks to different form factors, consumers in India can now easily pick between a keyboard experience, a touchscreen experience or both – all in stylish, slim packages.”

Motorola EX212: Measuring in a 13.9mm in width, the compact flip EX212 has a 2.4-inch display with a QVGA, apart from a secondary LED screen on the front panel – which displays notifications, alerts and other information dynamically even when the phone is shut. Other features include a 2MP camera, a 3.5mm jack, FM radio, and microSD storage up to 16GB. The Motorola EX212 is supposed to deliver up to 375 minutes of talk time, and 625 hours of standby time. Price: Rs. 5,190

Motorola EX119: The biggest difference between the EX119 and EX109, is that it bears a 2.4-inch capacitive touchscreen in addition to the QWERTY keypad, similar to the Android-based Motorola Charm. It measures in at 9.9mm in width, and comes with support for Wi-Fi connectivity, IMAP idle push mail, as well as native widgets for Facebook and Twitter. Other features include 3MP camera, microSD card expansion up to 32GB, microUSB and Bluetooth connectivity, stereo FM radio, and a 3.5mm jack. Price: Rs. 6,190 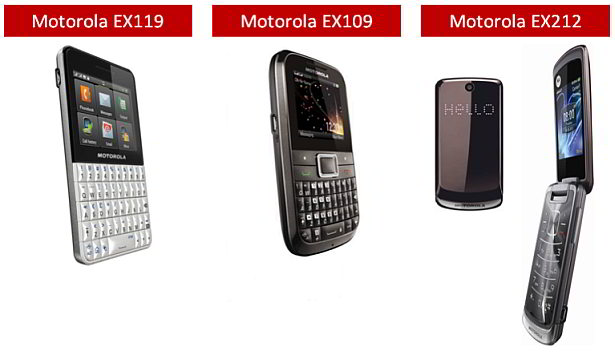