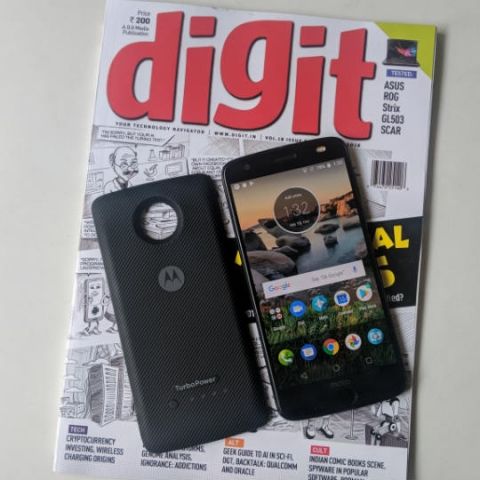 Lenovo has launched its Moto Z2 Force in India priced starting at Rs 34,999. The smartphone is built using series 7000 aluminium and its display is made using a ‘ShatterShield’ technology, which the company says won’t crack or shatter under duress. It will be available exclusively on Flipkart and Moto Hubs in Super Black colour from 12 AM, February 16. The Moto Z2 Force sports 16 pins on the rear, which can be used to connect any Moto Mod. The smartphone manufacturer is also including a Moto TurboPower Pack with the device, which gives an extra battery boost of 3490mAh and also supports fast charging with an output of 15W. The company claims that the TurboPower Mod can charge up to 30 percent of the device's battery under 20 minutes in fast charging mode.

Coming to the specifications, the Moto Z2 Force is powered by the Qualcomm Snapdragon 835 SoC clocked at 2.35 GHz. It features a 5.5-inch QHD POLED ShatterShield screen with a 1440 x 2560p resolution. The handset comes with 6GB RAM coupled with 64GB of internal storage ROM, which can be further expanded up to 2TB via a microSD card. On the rear are dual 12MP IMX 386 cameras with a f/2.0 aperture, where one is a colour and another one is a monochrome sensor. The main camera supports PDAF, LDAF along with a CCT dual-LED flash and is capable of shooting 4K videos at 30fps and 1080p videos at 30/60/120fps. On the front is a 5MP 85-degree wide-angle lens with a f/2.2 aperture rate and an LED flash.

The phone runs on Android 8.0 Oreo and is powered by a 2730 mAh battery, which the company claims can deliver an entire day of standard usage. It gets a front-facing fingerprint sensor and in terms of connectivity, it supports 4G dual-band Wi-Fi 802.11ac, NFC, LTE, GPS/ A-GPS, Bluetooth 4.2, and a USB Type-C port for charging.