The Moto G6 and Moto G6 Play are priced starting at Rs 13,999 and Rs 11,999, respectively. These devices have edge-to-edge displays and will be available from June 4. Moto G6 comes with a Face Unlock feature and Moto G6 Play has 4,000 mAh battery. 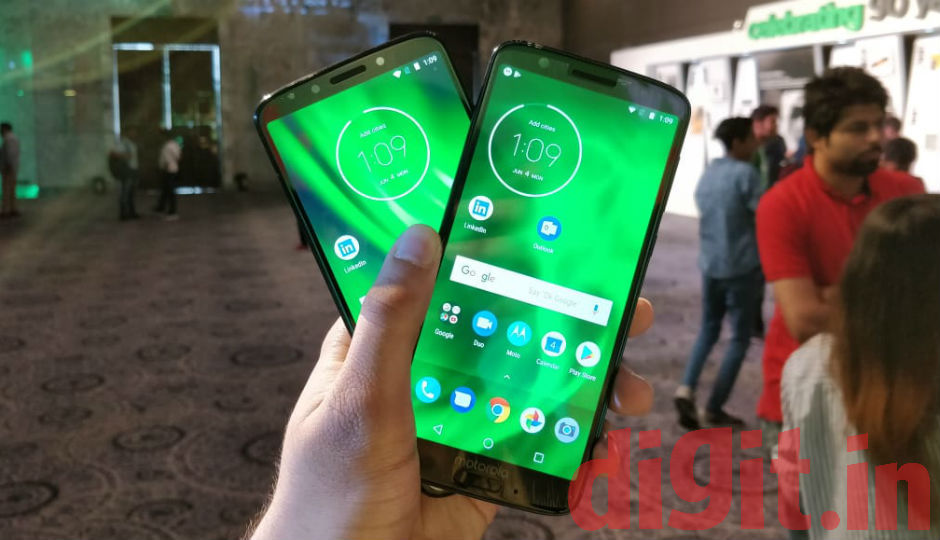 Riding the success of its G-series smartphones in India, Lenovo-owned Motorola has launched the sixth generation of this lineup in the country. Moto has unveiled the Moto G6 and Moto G6 Play with prices starting from Rs 13,999 and Rs 11,999, respectively. While the Moto G6 indigo black colour will be available on Amazon.in starting June 5, the Moto G6 Play in indigo black and fine gold colours will be listed on Flipkart on the same day at 12AM. The devices will retail from Moto Hubs across the country as well.

The Moto G6 comes with Face Unlock apart from the traditional unlocking mechanisms including, a fingerprint scanner. The device has a 5.7-inch (14.5cm ) Full HD+ Max Vision edge-to-edge display with an 18:9 aspect ratio that delivers vivid colours and fine details. Below the display is the home button which has the fingerprint sensor embedded in it. The Moto G6 has a USB-Type C port and retains the 3.5mm headphone jack. It is wrapped in scratch-resistant Corning Gorilla Glass with a 3D contoured back for a comfortable grip.

For its processing needs, the Moto G6 is powered by a Qualcomm Snapdragon 450 chipset coupled with up to 4GB of RAM and 64GB of storage. There’s also a 3GB RAM + 32GB ROM variant of the phone.

The smartphone sports dual-rear cameras with photo enhancement software. The Moto G6 has a 12-megapixel primary sensor with f/1.8 aperture along with a 5-megapixel depth sensor with f/2.2 aperture. The 16-megapixel front-facing camera with an LED flash includes low light mode, which lets in up to 300 per cent more light to make up for poorly lit conditions, the company claims.

Further, the device houses a 3,000 mAh battery and comes with a TurboPower charger included in the box.

The device comes bundled with several launch offers, including flat Rs 1,250 instant discount with HDFC bank debit and credit Cards and EMI transactions on Amazon.in. Customers can shop using Paytm Mall QR code and get Rs 1,200 cashback on mobile recharge on paytm at Moto Hubs. Other offers include extra Rs 1,000 off on exchange of any motorola phone on Amazon.in, no cost EMI options at both Amazon.in and Moto Hubs, 80 percent off on first kindle e-books on Amazon.in, among others.

In the camera department, the Mot G6 Play has a 13-megapixel camera with phase detection autofocus (PDAF). The camera automatically takes multiple shots and recommends the best one to keep. The 8-megapixel selfie shooter with an LED flash includes beautification mode, which smoothes skin and reduces blemishes or wrinkles.

Further, the Moto G6 Play comes with a 4,000mAh battery that company claims can last up to 32 hours on a single charge.

The Moto G6 Play will be made available on Flipkart and buyers can get a flat Rs 1,000 off is the device is purchased using ICICI bank credit and debit cards. Buyers can also shop with a Paytm Mall QR code and get Rs 1,200 cashback on mobile recharge on purchases made at Moto Hubs. Customers can also avail an exchange offer of Rs 1,500 on old smartphone and assured buy back with guaranteed upto Rs 5,100 buyback value on Flipkart. No Cost EMI options are available from Bajaj Finserve at both Flipkart and Moto Hubs.

Motorola has been working aggressively in the expansion of its retail presence in India and has announced several Moto Hub stores across the country. Last month, it opened 50 such stores in Mumbai. Motorola plans to open 1,000 stores across 100 Indian cities by end of 2018. Market research firm Counterpoint Research reported that global smartphone market declined year-on-year for second successive quarter in the first quarter of 2018. “Lenovo (including Motorola) captured the eight spot with a market share of 2 per cent. While the Motorola brand did well, it was Lenovo smartphones that registered decline during the quarter. The Lenovo brand declined in India and in rest of APAC while Motorola continued to do well in LATAM and US smartphone markets,” the firm said.