The Moto E5 Plus comes with 3GB RAM/32GB of internal storage, while the Moto E5 features 2GB RAM with 16GB storage. Both phones will be available for purchase starting June 11 via Amazon.in. 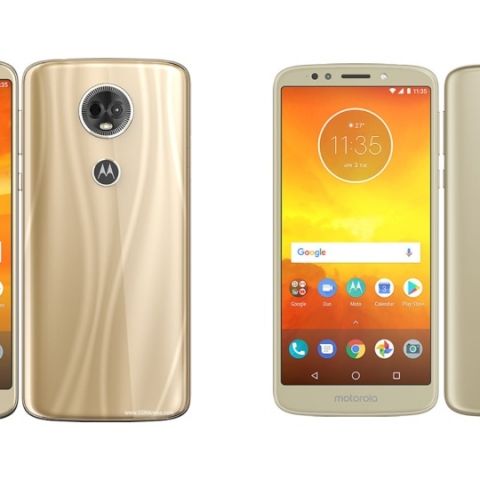 Lenovo has launched its Moto E5 and the E5 Plus smartphone at an event in India. The E5 and E5 Plus are priced at Rs 9,999 and Rs 11,999, respectively. The handsets were announced globally back in April, alongside the Moto G6 series. We already know the specifications of the smartphones, but the company has decided to switch the SoC on the Moto E5 Plus launched in India. It was initially announced running on the Snapdragon 435 chipset, however, in India, the device is powered by a slightly less powerful Snapdragon 430 SoC. The devices come in a Fine Gold and Black colour variants.

Both the Moto E5 and E5 Plus will be available for purchase exclusively via Amazon starting July 11. There are also some launch offers bundled with the devices. On the first two days of the sale, on July 11 and 12, the company is offering a flat Rs 800 discount to those who purchase the Moto E5 Plus using an SBI Credit Card. Additionally, there is also up to 9 months of no-cost EMI option and up to Rs 1,000 off on exchange. Jio users can also avail extra 130GB of data with the device. Those who buy the device offline via Moto Hubs and retail stores will be eligible to avail a Rs 1,200 discount using Paytm Mall. The offline discount is also available on the Moto E5.

The biggest update that the Moto E5 Plus features over its predecessor is a display with 18:9 aspect ratio. It is equipped with a 6-inch HD+ display with a 1440x720p resolution. The highlight of the device is its 5000mAh battery, which also supports Rapid Charging technology. Motorola says that once fully charged, one can get 24 hours of web surfing and 18 hours of continuous video playback. It comes with 3GB RAM, coupled with 32GB of internal storage.

The camera setup on the device gives an impression of dual primary sensors on the handset. However, one of the cut-outs houses a 12MP sensor with a f/2.0 aperture lens, while the other one has sensors for PDAF and laser Auto Focus. On the front, it comes with an 8MP camera with f/2.2 aperture and 1.12um pixel pitch for the sensor.

The Moto E5 features a design similar to the Moto E5 Plus, but it comes with a smaller 5.7-inch HD+ display with an aspect ratio of 18:9. It is powered by the Qualcomm Snapdragon 425 SoC with 2GB of RAM and 16GB of storage. On the rear is a single 13MP camera with a f/2.0 aperture, while on the front, it comes with a 5MP sensor. The device is equipped with a 4000mAh battery and comes with a 10W rapid charger. Both devices sport the Moto Display feature, which enables users to view their notifications from the lock screen.