Microsoft might not be done with phones just yet, hints CEO Satya Nadella

Nadella seems optimistic on the company’s potential for making phones. Future Microsoft phones might look totally different from the current crop of devices, he said. 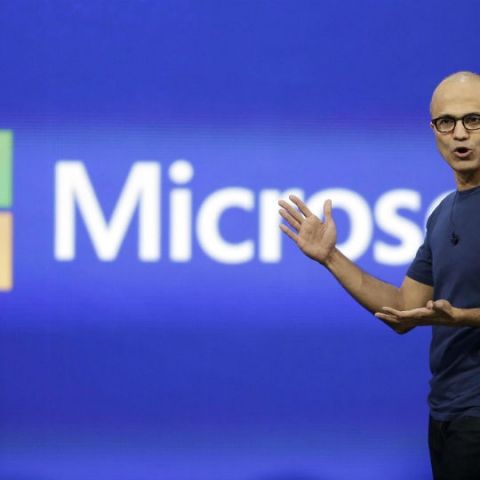 Microsoft might not be done making smartphones just yet. Even after the Redmond-based software giant pulled the plug on its Lumia series of smartphones last year, CEO Satya Nadella has hinted that the company will be making phones in the future for sure.

As Microsoft restructures its phone business and tries to make sense of the Windows 10 Mobile platform, Nadella seems optimistic on the company’s potential for making phones. Speaking in a podcast interview for Marketplace, Nadella said, “We make phones today, we have OEMs like HP making phones and others and we picked a very specific area to focus on which is management, security, and this one particular feature that we have called Continuum, which is a phone that can even be a desktop.”

The phone Nadella is referring to is the HP Elite X3 Windows phone, which was launched at the Mobile World Congress (MWC) last year. The device comes with a 5.96-inch QHD display, Snapdragon 820 platform, 4GB RAM, 64GB storage, 16MP/8MP cameras and Windows 10. While the phone can still be purchased, it is targeted mostly at enterprise consumers.

Now, new statements made by Nadella in the podcast reveal that the company might be looking to make phones which do not look like the current crop of devices available in the market. “So when you say 'when will we make more phones' I'm sure we'll make more phones...But they may not look like phones that are there today,” said Nadella. For now, the CEO said that the company wants to focus its energies on making its apps and services available on Android and iOS platforms.

To recall, there were multiple Surface Phone rumours that emerged last year. According to a Forbes report, Microsoft listed MSM8998 (which at the time was being termed as Snapdragon 830) as one of the chipsets that will support Windows 10 Mobile, fuelling speculation that the company might indeed be working on a Surface smartphone. However, since then, the listing has been altered and of course, no Surface Phone has surfaced so far.

Will Microsoft get back into the smartphone business? If yes, are you still interested in a Windows phone? Let us know your thoughts in the comments section below.