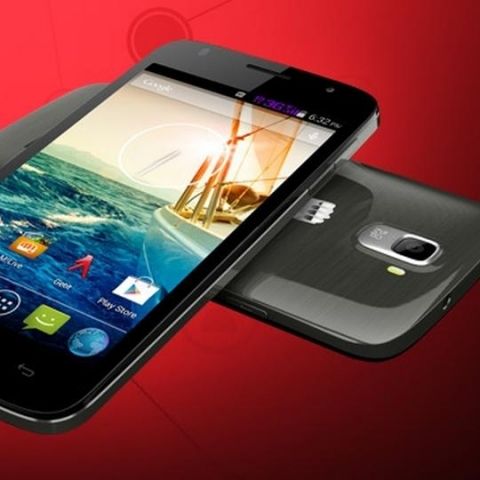 Micromax seems ready to announce two new budget dual-SIM smartphones, the Canvas Entice and Unite for the Indian market. Both the smartphones, which were spotted on the company's official website, support dual-SIM (GSM+GSM) with dual standby functionality and quad-core processors.

The Micromax Canvas Entice (A105) has a 5-inch IPS display with 480x800 pixels resolution. The smartphone is powered by a 1.2GHz quad-core processor coupled with 512MB of RAM. The Canvas Entice has 4GB of inbuilt storage, expandable up to 32 GB via microSD card slot. It features a 5MP autofocus rear camera with LED flash and a secondary VGA front camera. Connectivity-wise, the Micromax Canvas Entice supports 3G, Wi-Fi, Micro-USB, and Bluetooth. It is backed by a 1900mAh battery that according to the company claims to deliver up to 150 hours of standby time and up to 5 hours of talk time. The Canvas Entice was earlier spotted on an e-commerce website for Rs. 6,999 in  May.

The Micromax Unite features support for 21 preloaded languages with Reverie Multilingual Pack. The smartphone runs Android 4.3 Jelly Bean. It has a 4-inch IPS display with 480x800 pixels resolution. The Micromax Unite has a 1.2GHz quad-core Qualcomm Snapdragon processor paired with 1GB of RAM. It has a 5MP rear camera with LED flash and a 0.3MP front camera. It has 8GB of inbuilt storage expandable up to 32GB via microSD card.

The smartphone has a 1500mAh battery that according to the company delivers up to 5.5 hours of talk time and up to 140 hours of standby time. Apart from the dual-SIM capacity, the Micromax Unite supports GPRS/ EDGE, 3G, Bluetooth, GPS, Wi-Fi and Micro-USB connectivity options. The Unite is available in  Classy Black, Mystic Grey, Pristine White, Vibrant Yellow and Fiery Red colors.

The Micromax Canvas Entice and Unite will rival Motorola's Moto E, as well as the Lava Iris X1 in the budget segment.