Micromax In Note 1 Pro could offer better gaming performance thanks to Helio G90, as per a Geekbench listing Micromax In 2b recently broke cover offering a 6.5-inch HD screen, 5,000 mAh battery, a dual rear camera setup, 4GB memory, 64GB storage and a price tag of Rs 7,999. It features a Unisoc T610 CPU and a Mali-G52 GPU. The chipset offers decent performance in less graphically demanding games. However, with the Helio G90, the Micromax In Note 1 Pro could offer next-level gaming performance. 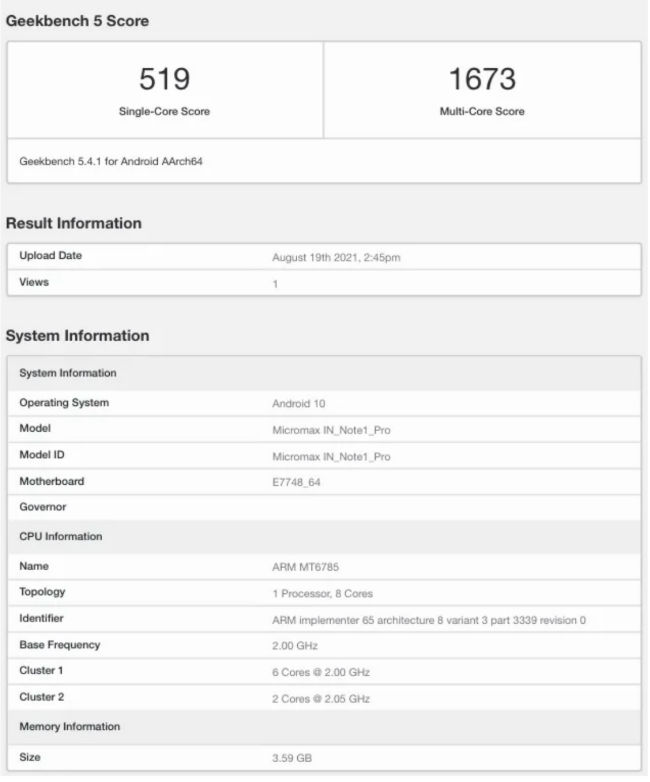 Micromax In Note 1 Pro has a single-core score of 519 and a multi-core score of 1673, as per the Geekbench listing. The MediaTek Helio 90 uses the much more powerful Mali-G76 MC4 GPU, which according to official claims, offers better performance in Fortnite and PUBG compared to the direct competitors.

In addition to gaming, the Helio G90 can also support the UFS 2.1 storage that can help drastically improve load times. The In Note 1 Pro Geekbench listing reveals no such improvement but it could be a possibility.

The listing also reveals the Micromax In Note 1 Pro comes equipped with 4GB RAM, which seems low for a “Pro” model. However, speculation suggests that a higher RAM version could also launch soon.

Furthermore, we have no information on Micromax In 1 Note Pro launch price either. However, judging the Indian smartphone maker’s latest release, expect the pricing to be competitive.