Micromax aims to tap the 6-inch phablet segment with the new Canvas XL A119. 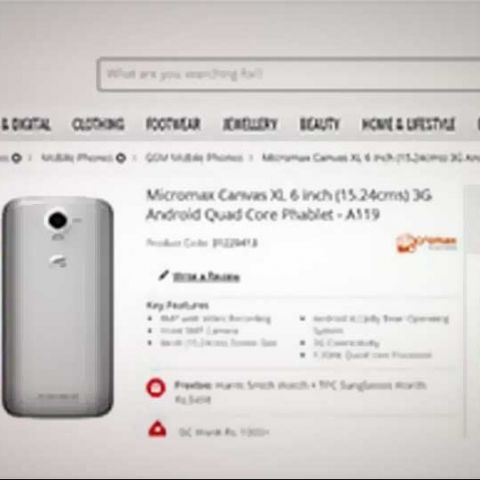 Micromax has launched a 6-inch Android phablet, called the Canvas XL A119, in the Indian market. Priced at Rs. 13,990, the new Micromax phablet supports dual-SIM with dual standby, runs Android 4.2 Jelly Bean and is powered by a 1.3GHz quad-core processor.

The Micromax Canvas XL A119 has a 6-inch QHD display with 960 x 540 pixels resolution. It sports 8MP rear and 5MP front cameras. The phablet has 1GB of RAM, 4GB of ROM, and supports expandable storage up to 32GB via microSD.  In terms of connectivity, the Canvas XL A119 supports 3G, EDGE, Bluetooth, Wi-Fi and USB. The phablet comes with 2,450 mAh battery, which is rated to deliver 9.5 hours of talktime.

The Canvas XL A119 is Micromax's first 6-inch phablet. Earlier, the company has launched the Micromax A120 Canvas HD Pro with 5.5-inch display, quad-core processor and 13MP camera.