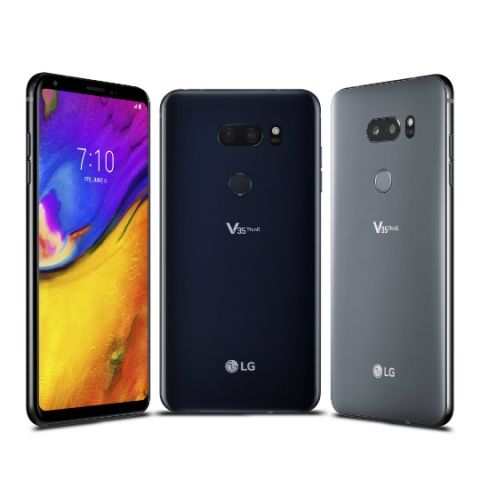 Early this month, LG launched its flagship G7 ThinQ and G7+ ThinQ smartphones and now, the company has released another flagship, the LG V35 ThinQ. The smartphone is said to deliver faster performance and enhanced photography, audio and AI functionalities. The V35 ThinQ is IP68 dust and water resistant, and comes with MIL-STD 810G certification as well. The smartphone features 6GB RAM, coupled with 64GB internal storage and there is also a V35+ ThinQ with 128GB of storage onboard. Except for more internal storage, there is no difference between the V35 ThinQ and the V35+ ThinQ. The devices have been launched in New Aurora Black and New Platinum Gray colour variants, and cost $900 (Rs 60,720 approx) in the US.

The LG V35 ThinQ dons a similar exterior as its predecessors with an 18:9 display aspect ratio and thin-bezel design. It is equipped with a 6-inch QHD+ OLED display with a 2880 x 1440p resolution and 538 PPI. The smartphone is powered by the Qualcomm Snapdragon 845 SOC, coupled with 6GB RAM. The internal storage can also be extended up to 2TB using a microSD card. The handset features a USB Type-C port for charging and is backed by a 3300 mAh battery.  It supports Qualcomm Quick Charge 3.0, wireless charging and comes with Bluetooth 5.0 BLE.

Coming to the optics, there is a dual rear camera on the V35 ThinQ. It features one 16MP sensor with f/1.6 aperture, which is coupled with another 16MP camera with 107-degree super-wide-angle lens with f/1.9 aperture. On the front is an upgraded 8MP camera, same as the G7 ThinQ. As is the case with LG’s ThinQ series of smartphones, the company has used AI CAM that offers 19 shooting modes to choose from, up from eight modes. The portrait or Bokeh mode works with both front and rear cameras, and there are also stickers for 2D or 3D overlay effects using face recognition. There is ‘Super Bright Camera’ mode, previously seen on the LG G7 ThinQ, which LG claims captures low-light images that are up to four times brighter. The device achieves this by using a combination of pixel binning and software processing, and the AI algorithm adjusts the camera settings automatically when shooting in low light.

The LG V35 ThinQ also gets Google Lens integration in the native camera app, Google Assistant and Google Photos. It is equipped with a Super Far-Field Voice Recognition (SFFVR) technology that is said to pick up the user’s voice from up to five meters away. For audio, there is a HI-Fi Quad DAC and it is also equipped with a DTS:X for delivering virtual 3D sound and up to 7.1 channel audio while using headphones.