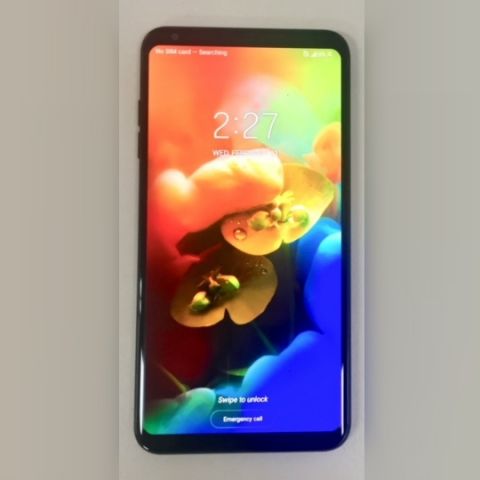 The LG V35 is seen featuring an 18:9 display aspect ratio and if the image is to be believed, it will retain a design similar to as its predecessor and will not feature a notch.

Yesterday came the news that LG might launch five new smartphones next month. One of these devices will reportedly be the company’s next flagship smartphone, the LG V35 and now the phone has been spotted on the Wireless Power Consortium (WPC) website. Alongside the listing, there is also an image of the handset, giving us the best look at it yet. The listing on the website and the reaffirmation of wireless charging were expected as its predecessor also comes with the feature. However, there's a lot to go on, thanks to the image. If the photo is indeed of the LG V35, then the company seems to be sticking with the tried and tested design of its predecessor, the LG V30S ThinQ. The device is seen featuring a taller 18:9 display aspect ratio and unlike the recently launched LG G7 ThinQ, there is no notch on the display.

It should be noted an image of the LG V35 was making the rounds of the internet as being spotted in the wild, but as pointed out by tipster Evan Blass noted, the image was the same as the one seen on the WPC’s website. The image only reveals the front of the smartphone and, same as its predecessor, there seems to be a single camera at the front, with the volume rockers on the left edge of the device. There is no breakthrough on the screen to body ratio of the device, which some smartphone manufacturers are aiming for, but we expect some upgrades in terms of hardware.

From the reports we have come across so far, the flagship LG V35 is expected to rival the G7 ThinQ, when it comes to the specifications. The smartphone will most likely be powered by the Qualcomm Snapdragon 845 SoC and is rumoured to sport 6GB RAM with 64GB internal storage. It could be backed by a 3300mAh battery and same as the G7 ThinQ and the V30S ThinQ, the V35 is expected to arrive with an AI-infused camera, which can recognise scenes and touch-up photos automatically. It is speculated to launch in an “Aurora Black” colour variant and feature a 6-inch QHD+ OLED display with an 18:9 display aspect ratio, an 80 percent screen-to-body ratio and as seen from the image, come without a notch. The device is speculated to feature a dual 16MP rear camera setup and an 8MP front-facing sensor with f/1.9 aperture.

The LG Q7 and Q7 Plus sport a 5.5-inch 18:9 FHD+ FullVision display and are powered by a 1.5Ghz or 1.8Ghz octa-core chipset, which is yet to be revealed. The Q7 Plus features a single 16MP rear camera and comes with 4GB RAM/64GB internal storage, whereas the Q7 is equipped with a 13MP rear sensor and sports 3GB RAM with 32GB of onboard storage. Both devices feature an 8MP front-facing camera, with a 5MP wide-angle sensor.

LG is also tipped to launch 2018 editions of its X5 and X2 smartphones, where the X5 is speculated to be a mid-range smartphone. It could feature a 5.5-inch HD display and run on the MediaTek MT6750 SoC with 2GB RAM, coupled with 32GB of internal storage. The device is said to feature a 13MP rear camera, 3MP front camera, and a rear-mounted fingerprint sensor. Its noticeable feature is rumoured to be the 4500mAh battery, which could also come with fast charging support. It will reportedly cost around 300,000 won (Rs 20,000).

Finally, the LG X2 is speculated to be launched in the budget smartphone category. It could be powered by the Snapdragon 425 SoC with 2GB RAM and 32GB internal storage and come with a 5-inch display. The device is tipped to sport a 13MP rear camera and come with a 5MP front-facing sensor. It is tipped to pack a 2410 mAh battery, feature a rear-mounted fingerprint sensor and might cost around 200,000 Won (Rs 12,500).