The LG V20 will be the first smartphone to run on Android Nougat out of the box. 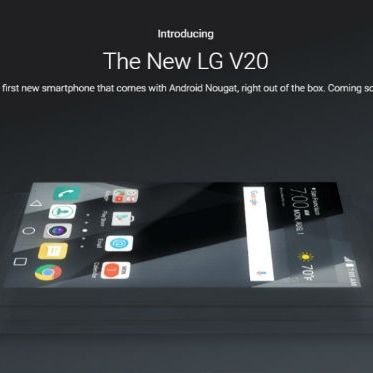 The LG V20 is expected to launch tomorrow, and earlier today, its full list of specifications have been leaked on Weibo. The upcoming successor to the LG V10 will offer Android Nougat 7.0 out of the box, in addition to flagship internal components. It will be the first smartphone to feature Android’s latest software out-of-the-box. Google has typically launched its latest edition of Android with the Nexus lineup of smartphones, but that seems to be changing with this year's LG V20. In terms of the device, the LG V10 had a secondary Always On display above the main display, but it is not yet clear if the LG V20 will offer a similar setup.

According to leaked specifications, the LG V20 will be powered by Qualcomm's Snapdragon 820 SoC, along with 4GB RAM, 4000mAh battery and a 5.7-inch QHD display, thereby making it somewhat of a direct successor to the outgoing Nexus 6P. The LG V20 may also feature dual-16MP cameras, and offer B&O Play audio.

LG’s latest flagship, the LG G5, also showcased a dual-camera setup with a unique implementation. You could either choose to shoot with the 16MP standard camera or the 8MP wide-angle camera for seamless panorama images. While we are not yet sure whether the LG V20 will present a similar format, we've stated that the LG V20 will be coming to India within this month. Stay tuned for more information on the upcoming smartphone by LG.