The LG G7+ ThinQ comes with extra memory and internal storage. The smartphone features a “Super Bright Display”, which is said to have a peak brightness of 1000nits and sports a dedicated Google Assistant key on the left edge. 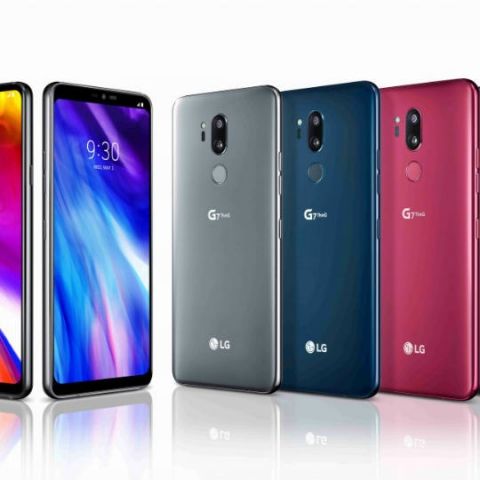 LG has officially announced its LG G7 ThinQ smartphone, along with the G7+ ThinQ, which is essentially another variant of the G7 ThinQ with more memory and internal storage. As confirmed by the company, the smartphones feature a notch on top of the display and comes with AI-based camera features, which were previously seen on the LG V30S ThinQ. The smartphones are wrapped with glass on both the front and the rear, to give support for wireless charging. The phones get Corning Gorilla Glass 5 protection as well. The LG G7 ThinQ and G7 ThinQ+ are IP68 dust and water resistant and  MIL-STD 810G compliant. The company is yet to announce the G7 ThinQ’s price but has said that it will initially be launched in South Korea, followed by other regions like Asia, North America, Europe, and Latin America. The device will be available in New Aurora Black, New Moroccan Blue, New Platinum Grey, and Raspberry Rose colour variants.

The LG G7 ThinQ comes with a rear-mounted fingerprint scanner and there is also a dedicated Google Assistant button on the device. Tapping the button once will launch the Google Assistant, while tapping it twice will boot up Google Lens. Users can also hold down the button to start talking to the Google Assistant. The phone includes Super Far-Field Voice Recognition (SFFVR) technology and is also equipped with “Boombox Speakers”, which are said to deliver 10 times louder audio, in comparison with standard phones. The company says that the device makes use of a resonance chamber to boost audio volume and also double the bass. “When placed on a solid surface or box, the smartphone utilizes its resonance chamber as a woofer to amplify the bass effect even more.”, says LG.

In terms of specifications, the LG G7 ThinQ is powered by the Qualcomm Snapdragon 845 SoC with 4GB RAM and 64GB internal storage. On the other hand, the LG G7+ ThinQ features the same processor, but it is coupled with 6GB RAM and 128GB of onboard storage. Storage on the phone can be expanded up to 2TB via a microSD card. The handset feature a 6.1-inch QHD+ 19.5:9 FullVision screen and a Super Bright Display, which is said to have a max brightness of up to 1000 nits. It is backed by a 3000mAh battery and runs on Android 8.0 Oreo.

In terms of optics, the LG G7 ThinQ is equipped with a dual 16MP rear-camera setup with one standard lens of f/1.6 aperture and another 16MP Super Wide Angle sensor with f/1.9 aperture. On the front, it is equipped with an 8MP wide-angle camera with f/1.9 aperture and an 80-degree lens. The device’s camera offers up to 19 shooting modes to choose from and the onboard AI algorithms are also said to make low-light photography easier. The AI on the device will reportedly adjust its camera settings automatically as per the scene to capture better images.

“The LG G7 ThinQ is strongly focused on the fundamentals and its launch marks a new chapter for our company,” said Hwang Jeong-hwan, president of LG Electronics Mobile Communications Company. “Through the combination of personalized and useful AI functionalities with meaningful smartphone features, this is LG’s most convenient smartphone yet.”

The LG G7 ThinQ is equipped with a Hi-Fi Quad DAC and also supports DTS:X to deliver virtual 3D sound for delivering up to 7.1 channel audio with earphones. It supports the Qualcomm Quick Charge 3.0 feature and comes with face recognition as well. There is also HDR10 support on the device.